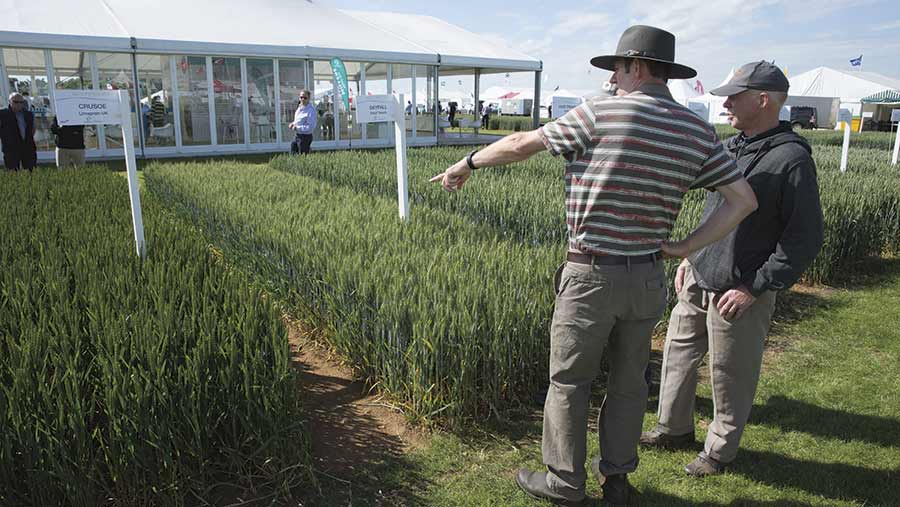 Soft-milling winter wheat varieties are seeing a revival as price premiums have risen and grain marketability becomes as important as yield and agronomic factors.

With the millers demanding more soft wheats for biscuitmaking and blending, growers are starting to show more interest in these varieties.

Group 3 biscuitmaking wheat variety Barrel is attracting the millers, while soft-milling Group 4 feed variety Sundance has interest from the blenders and potentially the Scottish distillers.

See also: Cereal 2017: Varieties and sprays to give growers a helping hand

“For biscuits, we stick to the Group 3 varieties, so choices like Barrel and Basset are relevant. Some of the soft Group 4s just aren’t suitable for our customers,” said Howard Leland, procurement director of Allied Mills.

In contrast, any soft wheat can be used for making coatings and batters, said Peter Jones, national wheat manager of Rank Hovis, so soft feed Group 4 wheats such as Bennington and Sundance are of interest, as well as all of the Group 3 choices.

“There is an opportunity for soft wheats and the premiums are looking attractive, but there isn’t huge availability of seed,” commented David Bouch, seed manager with agronomy group Hutchinsons.

Of the soft Group 4s, Sundance has the added bonus of the highest septoria disease rating (7.3) on the AHDB Recommended List and comes with orange wheat blossom midge resistance, so will also appeal to growers with their eye on input costs.

Another newcomer, soft feed Savello, is a contender for the North of England and Scotland, as it combines high yields with distilling potential and early maturity, but seed availability will be very limited this autumn, said its breeder Syngenta.

Otherwise, the new Group 1 breadmaking choice Zyatt is being tipped as a winner, with the quality wheats expected to take more market share from the feed wheats.

“Zyatt is clean, high yielding and has miller backing. It will be grown alongside Skyfall and Crusoe, which are both good, proven varieties,” said Mr Bouch.

In the Group 2 milling wheat sector, Siskin is set to increase its market share.

“It’s been clean all season and there will be plenty of seed to go round. Just remember that it shouldn’t be drilled too early,” he added.

The likely success of the new hard-milling Group 4 feed wheats is more difficult to predict, especially as yield is no longer the main driver for many growers, summarised Clare Leaman, cereals specialist at crop consultants Niab.

“There will be gradual change in this sector, rather than a big swing. Newcomer Kerrin could replace some of the Evolution and Santiago acreage, while Graham is likely to increase its market share in its second year,” she added.

Loyal Diego growers, who like the variety’s grain quality and consistency, could move on to its cleaner stablemate Costello if their priorities are unchanged, or they may opt for a higher yielding choice.

“This is where a variety like Siskin may benefit, as it can be treated like a feed wheat. It’s been a pleasure to grow this year, but growers will want to see how it yields before they commit,” she said.

Independent agronomists Patrick Stephenson and Peter Riley both sounded a note of caution about lodging in the new hard feed varieties, many of which are very tall with weaker straw.

“Most of them don’t have the best scores for lodging and they haven’t been really tested, either by the system or the season. We have seen some going flat in trials,” said Mr Stephenson.

The other concern is yellow rust, which continues to appear in unexpected varieties with good resistance ratings.

“The situation remains fluid. It means you must to be able to spray when you need to.”