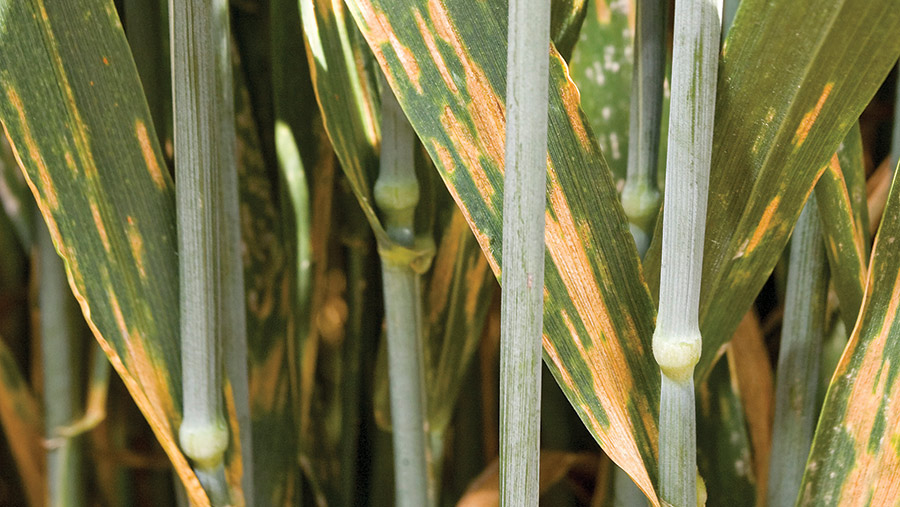 A small number of septoria isolates confirmed “highly resistant” to SDHI fungicides have been discovered in UK field samples collected late in the 2015 season.

Part of AHDB Cereals and Oilseeds-funded work, the latest results come from tests on susceptible seedlings in a glasshouse using field rates of straight SDHI fungicides.

Farmers Weekly reported the discovery of UK isolates with moderate to high resistance to SDHIs earlier this year.

At the time, researchers were unsure how pathogenic, or “fit”, the strains were from laboratory petri-dish tests alone.

However, latest results from the glasshouse – a step closer to a field situation – indicate these highly resistant isolates appear as fit as wild-type isolates on susceptible wheat seedlings.

It fires a warning shot to the industry about the need to protect fungicide efficacy, with the SDHI fungicide group – which includes actives bixafen, fluxapyroxad, penthiopyrad and isopyrazam – now heavily relied upon for effective septoria control.

This is due to declining efficacy of another septoria-controlling fungicide group, the azoles, which includes epoxiconazole and prothioconazole.

Fiona Burnett, chair of the Fungicide Resistance Action Group UK (Frag-UK), said: “It is imperative that the whole industry acts together to actively manage this situation.

“We’ve updated the Frag-UK guidelines, which emphasise the need to use SDHIs with robust azole doses and to include the use of multisites [such as chlorothalonil and folpet] in programmes.

“Azoles provide the win:win for 2016, both in terms of helping to protect the SDHIs, but also in widening the efficacy against yellow rust this season.’’

Further monitoring is also in progress to establish if there are fitness costs associated with these SDHI-resistant field strains, with the economic impact of their presence in commercial crops still uncertain.

Although good control of septoria from SDHIs is still anticipated in 2016, the ability of these new highly resistant mutated strains to survive and increase is a considerable cause for concern.

Dr Paul Gosling, who manages resistance research at AHDB, said: “The latest results are toward the worst end of our expectations.

“They confirm, more than ever, that it is critical to adopt best resistance management practices to slow the spread of these strains and maximise the effective lifespan of the SDHIs.”

In 2015, wheat leaf samples were collected from 12 sites across the UK and 1,168 septoria isolates were isolated and tested for fungicide sensitivity in the laboratory at Rothamsted Research.

A subset of these isolates – including highly resistant ones – was selected for glasshouse tests, which involved spraying susceptible seedlings with a straight SDHI fungicide.

The glasshouse test found that:

Adding to the potential seriousness of the current situation, the highly resistant isolates also appeared to be as pathogenic as wild-type isolates on the susceptible seedlings used.