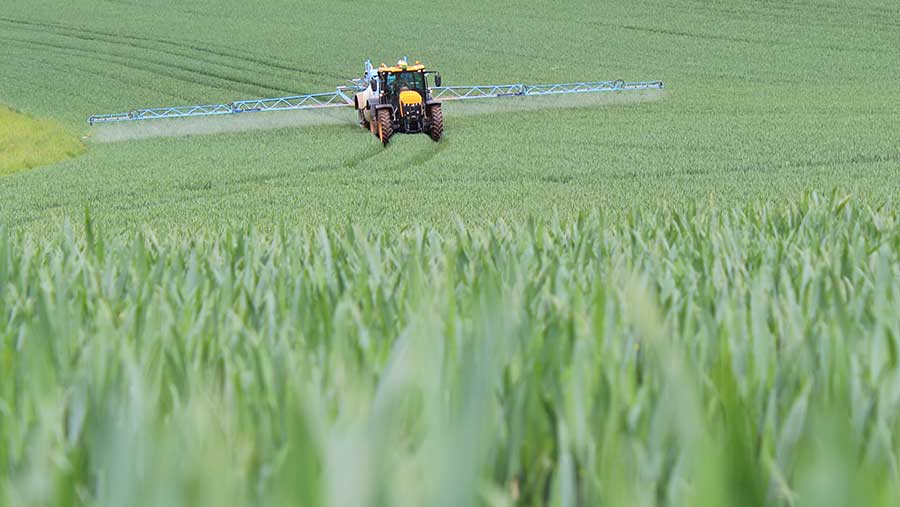 Spring barley crops in Aberdeenshire are getting their T1 fungicide sprays this week, while wheat T2 applications are due to commence very soon on one Scottish farm estate.

Farm manager and arable Farmer Focus writer Robert Drysdale tells Farmers Weekly that crops had been suffering throughout April until recent rain brought relief from dry conditions, but this has brought on weed challenges.

“We had 6mm of rain in the first few days of April and then nothing at all until the end of April when 31mm of wet snow fell,” explained Mr Drysdale, who manages 1,610ha across four contract farming agreements on the Monkymusk Estate, about 20 miles west of Aberdeen.

“This was able to soak in and as a result the wheat changed colour over night,” he added.

Weed control has been tricky this season, as the T1 wheat spray went on without a broad-leaved weed herbicide in the tank mix, for fear of scorching the drought-stressed crops.

While at this point, the weed pressure seemed fairly low, recent rain has brought on a flush of broad-leaved weeds such as mayweed.

Wheat will likely get the all-important T2 fungicide spray next week and Mr Drysdale says he plans to use older SDHI chemistry plus an azole, but will not include the multi-site protectant chlorothalonil, as this has been deployed earlier on in the spray programme.

Crops are showing signs of yield-sapping septoria and mildew in the base.

Spring barley crops are getting a T1 application of Cebara (cyprodinil + isopyrazam) plus chlorothalonil or Proline (prothioconazole) as appropriate, although disease levels are generally quite low thanks to the drier season.