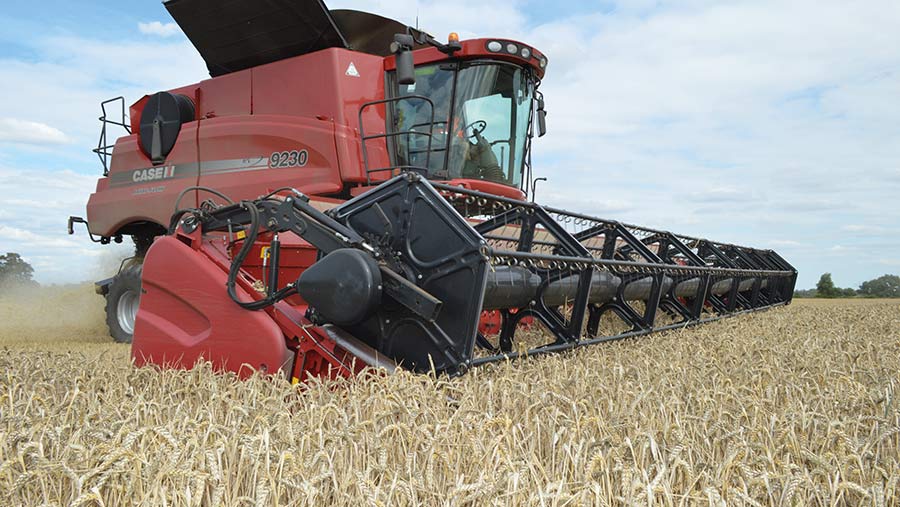 Wheat growers are shifting to varieties with better disease resistance this autumn with Extase the top pick as the winter wheat area could edge close to a massive 2m hectares.

Extase and second pick Gleam have good disease resistance giving growers the potential to cut back on fungicide use, as the wheat area bounces back from its nadir in autumn 2019.

These two varieties have overtaken Skyfall which was the top seller in 2019, as they show better resistance to wheat’s two big yield-damaging diseases septoria and yellow rust.

Barry Barker, national arable seed product manager at agronomy group Agrii, says Extase has taken a near 15% share of the market and has the potential to go above this in following seasons if it keeps its good disease resistance.

“Extase has looked very clean throughout the season and some are growing it as an alternative to feed varieties due to its good septoria resistance,” he says.

Mr Barker sees the top three sellers this season in the certified seed market as Extase, Gleam and Skyfall, compared with Skyfall, Gleam and Graham last year, with Graham slipping to fourth this season. Certified seed makes up about 55-60% of the overall market with the rest taken up by farm-saved seed.

Extase shows good standing ability and is relatively early to maturity and as a Group 2 milling wheat will attract a small premium over feed wheat, while its standout feature is its high septoria resistance score.

It has one of the highest septoria resistance ratings on the AHDB Recommended List at 8.1 on a scale where 1 is very susceptible and 9 shows good resistance. Other scores include Gleam at 6.3 and Graham at 6.8. Skyfall has slipped to 5.8.

Gleam is a hard-milling feed wheat which is seen as a reliable all-rounder with good disease resistance, and fits in well when grown as a second wheat.

Skyfall is sold out by many seed suppliers with its popularly boosted by its ability to be drilled late in the season into early March. However, its disease resistance scores are lower than those of its rivals.

Mr Barker believes the final area of winter wheat will get close to 2m hectares with early optimism of an even higher area tempered by the wet autumn, although he says any dry spells bring a flurry of orders.

“It will depend on the weather over the next few weeks, but I believe we will get close to 1.95-2m hectares,” he says.

Wheats in the West

Jonathan Baxendale, combinable seed product manager at seed supplier Wynnstay, says feed wheats Graham and Gleam are its top sellers in the West of the country where the group has its focus, just ahead of Extase.

“Graham and Gleam perform consistently well with good septoria resistance and show a higher yield than Extase in this largely feed wheat area in the West,” he says

The group’s arable operation is based at Shrewsbury and covers an area across the middle of England from Shropshire to Yorkshire, and in terms of seed sales it ranks third after Frontier and Agrii.

Mr Baxendale says wheat variety choice in the West often focuses on those with a resistance score of 6 or more for septoria, so Graham (6.8) and Gleam (6.3) fit in well.

For the future, he is looking at new feed varieties Saki and Insitor as both have good septoria scores with the latter variety doing well on light land in Shropshire.

Skyscraper has done well north of the border and although it is a slightly tall variety it has proved to have a stiff straw, while the old biscuit-maker Barrel is also popular with Scottish growers.

The new variety Saki has performed well and although a bit late to mature, Scottish growers, familiar with late maturing Revelation, have been drilling the variety early. Jackal has also provided a reliable variety in Scotland.

Mr Waite said that there was a lot of early drilling in Scotland with two-thirds to three-quarters of winter wheat drilled during September.