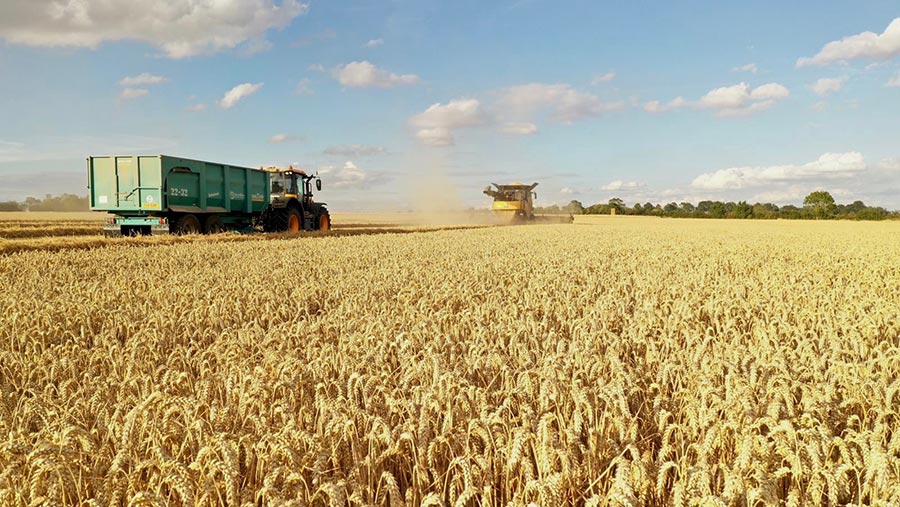 The variety can be drilled over a wide sowing window, has good disease resistance along with high yields, although it can be late to mature.

“It ended up being far and away our highest yielder.

“The combine recorded more than 10.8t/ha, though I’ll wait to see what it weighs out at before confirming anything,” says Mr Morris.

His 15ha of the variety was drilled at 200kg/ha on 5 October at Top Farm, Croydon, just south-west of Cambridge, went in well and always looked the farm’s best bit of wheat, and it out-yielded the next best wheat by 0.5t/ha.

Mr Morris will try the variety again this coming season, attracted by its wide drilling window, which is useful to balance blackgrass concerns and his contracting commitments.

Further north, a late-drilled crop of the variety produced an outstanding yield despite being sown in less than perfect conditions on PC Tinsley’s silty loams near Spalding in Lincolnshire.

“The variety has lived up to and exceeded our expectations,” says managing director Mark Tinsley after the crop was harvested on 12 August.

He adds wheats drilled before Christmas averaged about 10t/ha.

But 15ha of the variety, half of which was drilled on 21 October after potatoes, the rest a month later after sugar beet, averaged 11.5t/ha and gave a specific weight of 76kg/hl.

“We really were pleasantly surprised. It looks to be a real farmers’ variety – to produce what it did, given the late drilling dates and the limited inputs, says a lot,” he adds.

In Yorkshire, Richard Bayston says his 88ha crop of the variety was the best-looking wheat at his Coldhill Farm, Aberford, near Leeds, after drilling the crop in early September.

A robust fungicide programme was used at T1 and T2 as spray timings were compromised by the weather, but a T3 application was not needed, and it yielded an average of 9.6t/ha.

“It appears to have outperformed the other wheats. Increasingly, we’re looking for resilience and flexibility as much as yield. It will definitely have a place on the farm next season,” he says.

“Saki continues to deliver the goods whether it is drilled early or late – it can be sown from early September through to the end of February,” says Tom Dummett, the breeder’s cereal and oilseed product manager.