The biggest challenge with septoria control in winter wheat is to get the timing of the key T1 April fungicide treatment spot-on to protect the crop from this disease.

Septoria is the biggest disease threat to wheat crops, and it is being found in all wheat varieties in the wet western climate of Herefordshire. 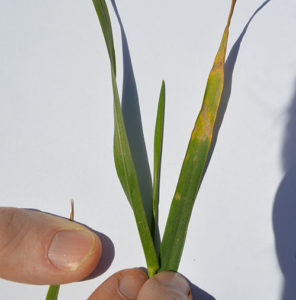 Agronomists warn it will not be a low-disease-pressure season

Jonathan Blake, cereal disease expert at crop consultants Adas, says septoria is endemic in every crop, adding it will certainly not be a low-disease-pressure season.

“Getting the T1 timing right is the biggest challenge in septoria control, while also choosing the right product is important,” he tells Farmers Weekly.

The T1 timing, when leaf three on the main stem of winter wheat plants is fully emerged and leaf two is starting to appear, usually occurs between 24-30 April in Herefordshire.

This should leave three to four weeks between T1 and the T2 flag leaf spray, which is usually between 17-19 May in the county.

Video: How to get wheat T1 fungicide timings spot on

Luke Wheeler, Midlands-based agronomist with independent agronomy group Indigro, demonstrates how to dissect a wheat plant to tell if it’s time for a T1 fungicide spray.

“The biggest mistake growers make is to go too early with T1 sprays and then end up leaving four to five weeks until T2, which allows septoria and rusts into the crop,” he says. 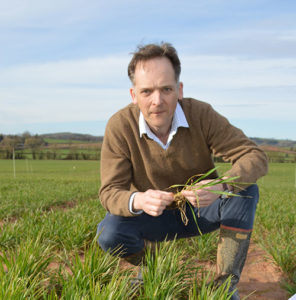 Mr Blake suggests growers need not start to look for the T1 stage until mid-April, and then they should take a number of tillers and start to peel back the leaves to identify leaf three.

If growers are drilling varieties late in the autumn with good disease resistance to septoria, such as Sundance, Siskin and Graham, they might not have to use an SDHI fungicide at T1 if the disease pressure is low.

Growers might chose an azole-chlorothalonil at T1 and then only use the SDHI at the flag leaf T2 stage in May if disease pressure is low, and try to limit SDHIs to maintain their efficacy.

The accurate timing of the spray will help improve disease control.

“The more we use SDHIs the quicker we may lose them,” says Mr Blake.

However, if the disease pressure is high then the best strategy would be to use an SDHI at T1 with a high dose of an azole and chlorothalonil.