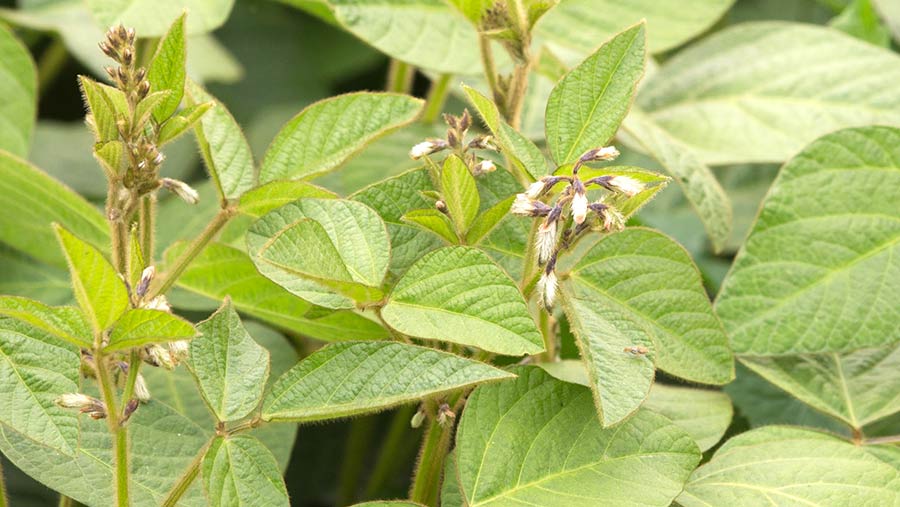 While other crops have suffered this season due to the hot and dry conditions, Soya has had no such problems. Its aptness for drought means growers looking to lessen the risk of dry conditions might want to consider it in their rotation.

Soya’s ability to cope with droughty conditions such as those experienced this season are expected to help push up the area grown to almost 5,000ha next year.

With bean and pea crops yielding poorly in the hot and dry weather, seed group Soya UK expects the healthier gross margin available with soya, even in a bad year, to convince many growers to swap.

In a good season British soya crops are expected to yield around 2.5t/ha, but due to the adverse conditions this is likely to be down slightly.

The stems and leaves of soya plants are covered in hundreds of tiny hairs, which reduces evaporation and makes them ideally suited to drought conditions.

“Soya has loved the sun. I have seen some crops that will do 2.5t/ha this year,” says David McNaughton, managing director of Soya UK.

“Ironically, the thing that hurts the crops was the wet before the dry period. Where we are seeing poor crops, it is where the seed-beds were bad and wet.”

Soya does not like compaction, and will also not germinate well if drilled too deep, especially on heavy ground.

Prices for UK-produced Hard IP (full non-GM traceability) soya have also been buoyed by the introduction of Chinese tariffs on imports of any origin soya.

This positive outlook means demand is outstripping supply and Soya UK would like to expand the British soya area well beyond next year’s 5,000ha.

“I would like to have 8,000ha next year; the market wants it so I will buy it. Major soya producers have had a car crash this year, but UK soya beans could well rise over £400/t,” said Mr McNaughton.

Jamie Clark from Maidstone in Kent is growing 69ha on a seed contract at Boughton Place, Sandway, for the first time after the price for marrowfat peas dropped to uneconomical levels.

Only 7.6cm of rain fell on his farm in June and July, but despite this, he says the crop never wilted or looked stressed even on the hottest days.

Last autumn after the straw was baled it was sprayed off in mid-October and sub-soiled as deep as was possible.

On the heavy Wealden clay it was too wet in early April to drill the crop after the weeds were sprayed off, so drilling didn’t take place until 25 April. However, this was followed by 7.6cm of rain on 30 April.

“The rain created some problems on the heavier ground as it capped it like concrete. I didn’t think it was going to come through, but it did except for on the headland,” Mr Clark says.

“My only problem with it is that it sets too many pods low down on the plant so we are going to have high losses.”

Mr McNaughton says losses from low-set pods can be an issue for growers, but can be minimised by good seed-bed preparation to allow the header to get down as low as possible to “scalp” the crop.

Achieving the target plant population of 50-60 plants/sq m will also encourage taller plants and higher-set pods, as soya is inclined to compensate and fill out the space by producing short and bushy plants if the target isn’t achieved.

Mr Clark is likely to combine the crop in the first week of September after it started to senesce two weeks early, which is expected to affect yields. Despite this, he still plans to continue with the crop next year.

Soya growers gained a new weapon in the battle against pests this year with the issuing of an extension of authorisation for minor use (EAMU) for the pyrethroid Lambdastar (lambda-cyhalothrin).

Lambdastar is the only option available for soya growers for controlling dahlia bean seed fly, which alongside pigeons is the biggest threat to crops and can reduce yields by a third.

Soya UK says that applying Lambdastar as close to emergence as possible is essential, and at £0.80/ha will not affect gross margins.

However for this season, Artist (flufenacet + metribuzin) has been given an EAMU, giving growers three options for grassweed control next season.

Growers now have two graminicides options to tackle grassweeds; both Fusillade Max (fluazifop) and Laser (cycloxydim) have secured EAMUs, while an EAMU for Centaurian Max (clethodim) should be in place ready for the 2019 season.

The nitrogen-fixing rhizobium bacteria for soya is not native to the UK so Soya UK seed is pre-inoculated with three types of bacteria. From next season, this will be increased to four following trials this year.