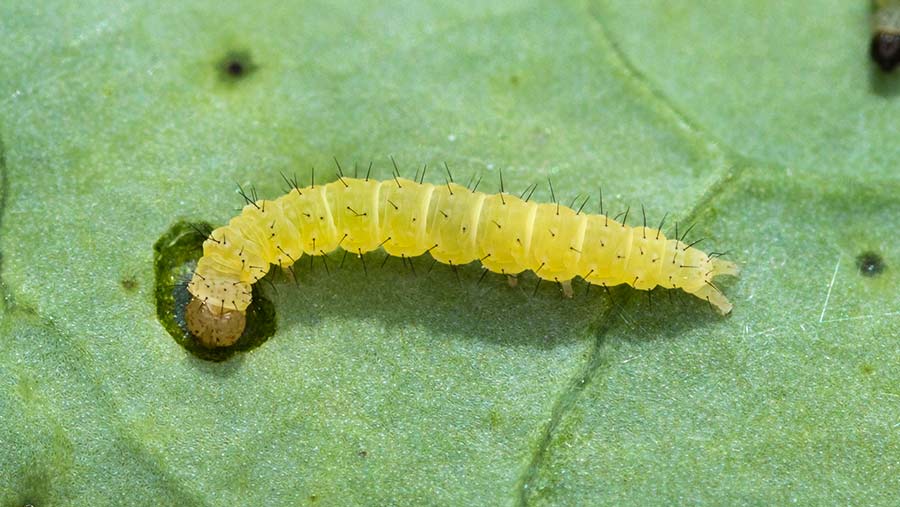 Diamondback moths are a sporadic problem in the UK and can cause cause costly damage to oilseed rape and vegetable brassica crops such as cabbage or cauliflower. The adults lay eggs on leaves and then the larvae hatch to defoliate plants.

Last summer saw the highest numbers since 1996. This was a result of favourable conditions that allowed them to move across the Channel.

To gain a better understanding on how to tackle the pest, moth samples from Lincolnshire, Suffolk and Scotland were tested by staff at Rothamsted Research. They found populations in all three areas were resistant to the insecticide.

“Pyrethroids are normally the first choice of insecticides against moth pests, but these tests indicate resistance is present in the diamondback moth population over a wide geographical spread,” said Steve Foster, research team leader.

“If growers continue to use pyrethroids, this could be doubly damaging – not only would it not have an effect of diamondback moths, it would be killing beneficial insects that attack diamondback moths,” he explained.

The pest can cause crop losses of up to 100% in brassicas, chiefly generated by caterpillar damage.

However, Essex-based Frontier agronomist Marcus Mann said in spite of large moth populations, oilseed rape damage in his area was low last summer, as they arrived too late.

“Moth populations reached virtually epidemic levels, but they didn’t arrive until plants were at the desiccation stage, and while there was evidence of some pod stripping, none were opened and there was no reported effect on yield,” he said.

He explained that a second wave of the pest had been expected in oilseed rape crops established this autumn, but just 15% of the planted crop survived because of the drought in his area, meaning the moths didn’t have an opportunity to do any noticeable damage.

Dr Foster said growers and agronomists interested in diamondback moth control will have an opportunity to discuss future strategies at a workshop to be held at PGRO near Peterborough on 24 January 2017.

Further information is available on the AHDB Horticulture website.