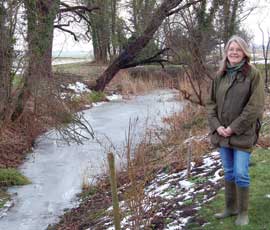 Co-operating with neighbours can take ELS and HLS stewardship outcomes to new levels over wider areas without hurting income.

That’s the feedback from participants in a project launched at the Oxford Farming Conference. It involves 14 farmers working together on 3,782ha of fenland around Thorney in Cambridgeshire – some of the most productive land in Europe, notes the RSPB’s Simon Tonkin.

“The Thorney Farmland Bird Friendly Zone shows it is possible to integrate the needs of wildlife with those of production and profitable farm businesses.”

Michael Sly, who runs what he describes as a “high input/high output” business growing cereals, oilseed rape, sugar beet and pulses on 1,618ha, has five neighbours within the zone.

“We did have a small area in Countryside Stewardship for nine years and another in ELS for four years. But by working with Simon on a joint HLS application with neighbours Gary Cade and Martin Stuffins I saw we could deliver a greater benefit over a larger area.”

Mixed cropping and miles of watercourses mean the Fens already support reasonable populations of farmland birds and other wildlife, he notes. “But the opportunity to enhance what’s already there and sustain it is important to me.”

The 10% of the farm devoted to specific stewardship helps minimise LERAP problems, he adds.

One HLS measure, along with drain level manipulation and the introduction of skylark plots, unharvested strips, wild bird seed mixes and beetle banks, has been to sow a specific grass mix on 6.7ha as an alternative corncrake habitat.

“The overall economic impact is really no different than it would be, given the risks of the weather, yield and price, than growing another break crop. As a percentage of the overall area it can be viewed as just another crop with a fixed income over a period.

“Although I like to maximise returns, I also want to see a healthy and balanced environment which future generations can enjoy.”

Mr Gary Cade, who grows a similar range of crops on a total of 620ha of silty clay and also runs a pest control business, has been involved with ELS since 2005. “We used it as a management tool to help with LERAPs as well as aid wildlife.”

He became aware of the Thorney project at a RSPB-arranged meeting with neighbours. “I was pleased to become involved as I could already see the increase in bird numbers from our ELS scheme which included 6m buffer strips and skylark plots.

“With Simon’s help we’ve created a diverse range of HLS options on each neighbouring unit to aid the environment – such as ditch re-profiling, floristically enhanced margins for insects and wild bird seed mixtures for birds over the winter.

About 23ha of the 401ha home farm is now within the zone with a further 19ha still in ELS.

Janet Herbert, with much the same cropping on her 170ha of mainly rented land, has two Thorney zone neighbours – Philip Bradshaw and Paul Little.

“I was approached by the RSPB and very much liked the idea of establishing a sizeable wildlife area in a part of the country generally considered used solely for producing food.

“I consider wildlife to be part of my farm business, and I try to cater for its needs just as I would a crop of wheat. Taxpayers are making a considerable contribution to my income, and I like to think they’re getting value for money.

“My aim is to create a wealth of different habitats to suit a whole range of wildlife.” Recent stewardship steps have included creating a 3,000sq m pond and planting almost 2km of hedge of which only three-quarters is stewardship funded, she notes.

Joining the Thorney project means she is managing 14% of the farm for wildlife with 6% managed with options such as skylark plots and nectar flower mixtures counting towards Campaign for the Farmed Environment targets. “As well as voluntarily planting 0.5km of hedge we’ve improved the area around the new pond.

“Financially I don’t foresee any reduction in business profits. The areas devoted to stewardship were chosen with specific goals in mind. For example I’ve established pollen/nectar mixes on land badly lacking organic material. So as well as providing a wonderful environment for insects and birds they’ll improve the soil structure for any future return to crop production.

“By making changes to the way we manage land not in production we’ve seen grass snakes establish themselves, and we’re also seeing woodcock, great crested newts and water voles on the farm.

The ultimate success of the Thorney project will be assessed by measuring how well it delivers habitats for a range of wildlife species throughout the scheme’s 10-year life, says Mr Tonkin. “However, we expect responses within the first two years.”