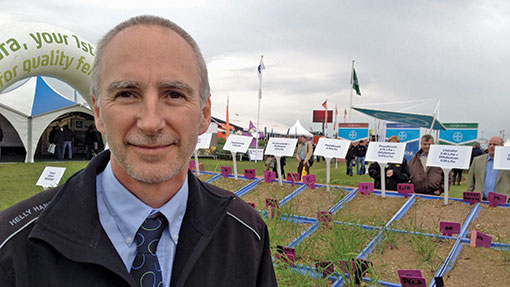 Residuals work best when applied at true pre-emergence to a fine, consolidated, moist seed-bed. Rarely, though, is there an autumn when all these factors come together, and even if they do, it’s often not for long enough to get the whole farm sprayed. Compromises have to be made, but how do you choose?

“The advice for optimising pre-em performance takes into account the way in which residuals work,” explains Gordon Anderson-Taylor, development manager at Bayer CropScience.

“Residual herbicides create a continuous layer in the top few centimetres of soils. Emerging roots and shoots of germinating weeds grow through this layer and take up the active substances. A consolidated seed-bed ensures good contact between the treated soil layer and the emerging seedling. Moisture helps the movement of the pre-em within the soil and into the plant, and timing applications to within 48 hours of drilling is critical to prevent blackgrass roots and shoots growing beyond the reach of the pre-em. Together these create ideal conditions for maximum potential uptake of the active ingredients.”

Where conditions are less than ideal, Dr Anderson-Taylor advises growers to consider delayed drilling rather than the pre-em.

“It creates an opportunity for another stale seed-bed and conditions tend to be more favourable for the pre-em, too – there is typically more soil moisture around when the crop is sown later.

“Where there is a big area to cover and delayed drilling across the whole area isn’t possible, drill the worst fields last, ensuring the sprayer still follows the drill,” he says.

“If you don’t, you risk blackgrass roots and shoots growing beyond the layer of pre-em,” he warns, “in which case the blackgrass won’t absorb as much of the active substances and, consequently, control will be affected.”

Even when drilling can’t be delayed and soil conditions are dry, experience shows it is still better to apply the pre-em rather than wait for soil moisture, says Dr Anderson-Taylor. “Subsequent rain could prevent application or delay it until after the blackgrass has emerged – substantially reducing the control provided,” he adds.

“Residual herbicides such as Liberator [flufenacet + diflufenican] persist in the soil and remain active against blackgrass for up to six weeks, and a true pre-em timing is within 48 hours of drilling.”