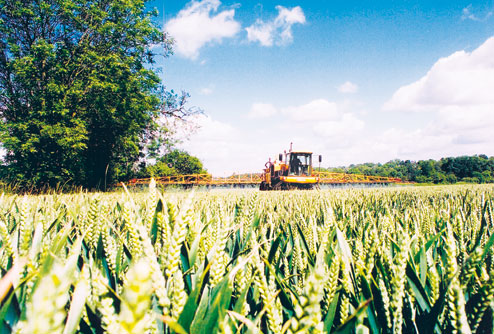 The late season and lower yield outlook points to less need for late foliar nitrogen on milling wheats, although an application could be useful if there is a long grain-filling period.

Advisers say that a final decision will have to be taken much nearer to the grain milky ripe stage for these applications on a field-by-field basis.

According to Dick Neale, tech­nical manager at advisers Hutchinsons, a great deal of the nitrogen already applied to crops either went on late or is being used late.

“We know that yields have been compromised in many areas. So in these situations, nitrogen levels are probably already sufficient,” he says.

However, Mr Neale adds that if the weather from now on allows for a long, slow grain-fill period, there could be some good yields from the better fields.

“And these are the sort of crops that will benefit from a late application. So it’s quite a conundrum this year,” he says.

“That’s why growers will need to react on an individual field basis. They will know whether they have seen responses to late applications in the past, and if they believe that they have sufficient yield potential this year,” Mr Neale adds.

The fact that most wheat crops are disease-free, with access to plenty of soil moisture, means their ability to take up the nitrogen already applied is good, he says.

David Leaper, technical manager at Openfield, believes there is a stronger case for late nitrogen on lower protein milling varieties such as Solstice and Gallant, but stresses there is a reduced case overall this year.

“And those varieties with an inherently higher nitrogen content, such as Edgar, won’t need it,” he says.

“Yields aren’t expected to break any records this year, so the protein dilution that can occur in high-yielding milling varieties is less likely to take place. Holding back would seem sensible,” Mr Leaper explains.

“This season, we’ve got lower plant populations from later drillings. If they compensate by producing bolder grains, there could be some protein dilution. The difficulty is knowing how much,” Mr Leaper adds.

He continues that for those growers supplying a Warburtons’ milling contract, the late milky ripe application is not permitted. “They don’t see any benefit in the grist from it. So they accept grain at 12.5% protein.”

Mr Leaper’s advice is to base decisions on past experience, expected yield, the protein of the variety being grown, the status of the crop, and the farm’s previous success with hitting 13% protein.

“There aren’t any tests that can be done, as tissue analysis is a poor indicator. So growers will need to use their judgement,” he adds.

Gleadell has launched ENhancePro, a nitrogen-based foliar feed, for use on milling wheats this year.

Claimed to be highly efficient and crop safe, the product is formulated from bio-available sulphur and stabilised nitrogen, together with adhesion compounds to help keep the solution in contact with the leaf.

As a result, it can be applied at lower rates than some competitor products, maintains Rob Buck, fertiliser trader with Gleadell Agriculture.

“Based on a milling premium of £25/t, growers can expect to see a four-fold return on their investment if the application secures them the premium,” Mr Buck says.

Applied at 50l/ha in 150 litres of water, the product delivers 17kg/ha of sulphur nitrogen which, if applied correctly, gives 11kg/ha to the plant.

“Go on at GS69-75 with a fan jet at the fine end of medium, avoiding bright sunlight or windy conditions,” Mr Buck advises.

He notes that the product contains buffers to protect crops from scorching.

Lincolnshire grower David Pridgeon, who has 150ha of milling wheat at Hogsthorpe near Skegness, is planning to use the foliar product on part of his crop this summer. “We get high yields on our heavy silty clays, so protein dilution is common. For that reason, foliar nitrogen is an essential input, with an uplift of 0.75-1.00% seen after treatment,” he says.

Mr Pridgeon’s view is that the product has the right sulphur/nitrogen combination for the quality of protein that millers require.

“I also like the fact that it has lower application rates, while its reduced scorching properties are another advantage,” he says.