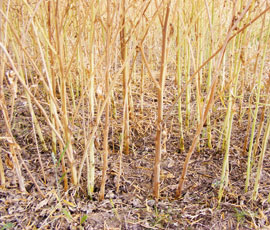 In a good year, it has little effect. In a bad one, verticillium wilt is capable of halving oilseed rape’s yield, which is currently equivalent to £800/ha. And bad years often follow a warm spring.

That warning, from Peter Gladders of ADAS, comes as the 2010 UK survey figures from FERA are released. Of 100 crops randomly tested nationally, 25% were infected with Verticillium longisporum last season compared with just 10% the year before.

In central England, a staggering 40% of crops had some verticillium wilt – remarkable considering that the fungus was first confirmed in this country as recently as 2007. Its initial appearance on farms in Kent and Herefordshire, both hop growing counties, suggested there might be common factors with hop wilt, caused by a related pathogen. This now seems unlikely as oilseed rape crops are being affected as far north as Yorkshire.

The soil-borne fungus, common in continental Europe, may also be seed-borne at low levels, and could have come in on imported seed years ago, suggests Dr Gladders. Another HGCA project aims to develop a seed diagnostic test.

Growers have particular cause for concern after a warm, dry spring like this one, and he fears there is worse to come as climate change bites. Once the disease is established, premature ripening could be a common sight on the warmer soils of the south.

“Wherever you are in the country, inspect crops carefully when you are deciding which desiccation method to use. That’s the time you’ll start to see symptoms and be able to confirm if the premature ripening is a result of verticillium or something else.”

The disease appears as brown or grey stripes running up stems and into branches, with black microsclerotia showing through breaks in the stem surface. Symptoms can be confused with the blackening caused by phoma stem canker.

As is the case for most soil-borne diseases, there is no specific chemical treatment option, though trials are investigating the benefit of using fungicides.

Amistar (azoxystrobin) as a pre-drilling soil treatment or an early flowering spray may prove useful, though Dr Gladders can’t yet recommend such tactics.

Where disease is suspected, he would modify variety choice and oilseed rape’s frequency in the rotation. Though not failsafe, growing a resistant variety can significantly minimise the impact of verticillium wilt.

Of the current RL varieties, Catana is most resistant, with Compass, Oracle, Palace and DK Cabernet reasonably tolerant. Excalibur appears susceptible but seems to have a measure of tolerance as it can give reasonable yields despite the disease, but Castille and Es Astrid are too sensitive, he says.

It has yet to be confirmed how long the pathogen survives in the soil without a host. However, a one in four rotation is thought to be prudent, while a higher frequency is considered risky.

When it comes to sowing, going in later than mid-August may alleviate the risk of severe yield loss, believes Dr Gladders. Ongoing trials will confirm the contribution of autumn conditions to later infection.

It is hoped the project will also yield a soil test and be able to relate the number of spores in the field to infection levels, so guidance can be given on rotations and varieties according to potential yield loss.

It’s important to find out how verticillium wilt develops and causes yield losses in oilseed rape before it becomes a widespread threat to crop profitability. The project will develop methods to quantify levels of soil-borne inoculum in the UK, and identify breeding lines with resistance, to speed up the production of varieties able to tolerate the disease.

Catch up with previous pieces from our Research in Focus series on our new dedicated webpage, giving growers easy access to the latest HGCA-funded cutting edge research. Also, follow links to see the HGCA project reports for yourself, giving more in-depth results from the projects. Go to www.fwi.co.uk/researchinfocus