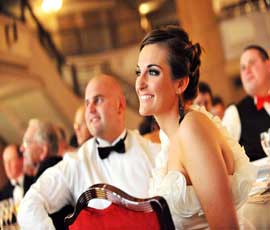 Nominate someone you know for the 2011 Farmers Weekly Awards and you will be entered into a prize draw to win a pair of tickets to the awards night, plus accommodation at a top London hotel.

This year the Farmers Weekly Awards night will take place on 6 October at the historic Grosvenor House Hotel – a five star venue on London’s Park Lane – and as always it promises to be a star-studded occasion.

In the past the awards have been hosted by the likes of Julia Bradbury, Kate Humble, Fiona Bruce and Claire Balding. Celebrity farmer Jimmy Doherty and Countryfile‘s Adam Henson have both been on to the Farmers Weekly awards stage to collect trophies, and last year guests watched a specially filmed video address from HRH Prince Charles.

Nominating someone for an award is easy. Just fill out the form on FWi to tell us who you are nominating, which category you are nominating them for and a quick summary of why you think they deserve the award. Farmers Weekly will then follow up all the nominations and invite each one to enter the awards.

Cambridge arable farmer James Peck won Young Farmer of the Year at last year’s event.”Winning the award gave recognition to me and my staff,” he said. “It gave us confidence that we were doing the right thing and encouraged us to look at new ventures.”The whole team came along on the night and everyone was there to share in the success. Winning was an amazing feeling which I’ll never forget. Plus I got to kiss awards presenter Fiona Bruce. That certainly added to the moment.”

See the 2011 Farmers Weekly Awards website for more information on each of the award categories, and click on the “Nominate” tab to fill out your nomination. The winners of the prize draw will be announced shortly after the closing date on 30 April.

*The prize of a one-night stay in London is for two people sharing a double room on the night of the awards.