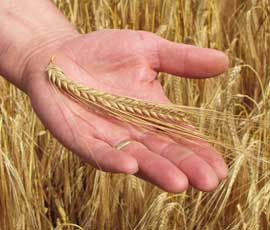 Harvest has been in full swing at Itchen Stoke Estates, Winchester, Hampshire, and farm manager David Gray is pretty pleased with yields so far, too.

Talisman winter barley yielded a pleasing 8t/ha, with Fentara coming off at 8.5t/ha. Volume, grown for seed, managed 6.75t/ha, which was about par for the course, said Mr Gray.

“As it’s a hybrid grown for seed, we sow male plants around the headland, with the seed crop in the middle, so only get about 60% germination.”

Atego spring oats were nearly ready to cut, with Monaco oats also being grown for seed. “The Atego straw is still a bit green, so in an ideal world I’d leave it a week,” said Mr Gray.

“But given that we don’t know what the weather’s going to do, if I get a window I’ll have to cut it.”

After that would be Diego winter wheat, grown as both a commercial and seed crop, and Scout for seed.

“We’ve also got Boxer and Fuego beans, followed by maize which we will cut for crimping.”

Most farmers had finished combining winter barley in the area, and were just starting to move into winter oilseed rape, he added.