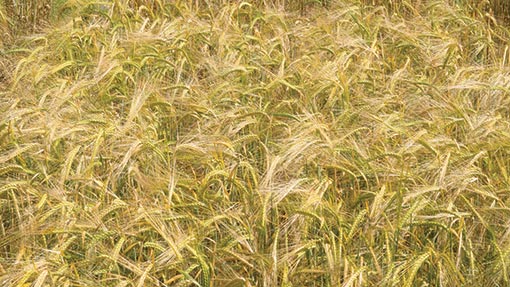 There are plenty of reasons for the current interest in winter barley, with varietal improvements being one of the main ones.

There are two camps when it comes to winter barley – those who are fans of hybrid barley and those who are sticking with conventional types.

Either way, there’s a great deal of activity in the crop, notes David Leaper of Openfield, who sees a role for both hybrids and conventionals, adding that the pace of improvement has been rapid.

“We’ve got some high-yielding varieties, with good agronomic characteristics, and they are challenging for a place in the rotation because of that. They also offer the chance to spread workloads and provide an early entry for oilseed rape, as well as compete with blackgrass,” he said.

See also Why winter barley is bouncing back into favour

Volume is the main Hyvido six-row hybrid variety, he says, and it has performed well, especially in the North. “But it’s interesting to see that Glacier, a conventional two-row variety, is on a par with it in the East,” he says.

Tower, a new addition to the HGCA Recommended List for this season, is the highest-yielding conventional two-row variety. It appears to be better on lighter soils, as it is a taller variety than its stablemate, Glacier, says Mr Leaper, but there’s little to choose between the two.

“There are disease-resistance differences, with Glacier being stronger on net blotch,” he says.

Barry Barker, of Agrii, predicts that Tower will take a 10-11% market share. “Whether it takes all of the Cassia market remains to be seen. Glacier has bigger grain, is slightly earlier and offers better net blotch resistance,” he says.

Both, however, are an improvement and have better rhynchosporium resistance than Cassia. “Growers will go for the one that suits their particular farm situation the best,” he says.

For this reason, he is discounting the other two conventional two-row newcomers, Tetris and Cavalier. “They have plenty to offer but are up against some stiff competition,” Mr Barker adds.

He reports an increase in hybrid barley in the East and West, but points out that they need to get back on to the Recommended List so that growers can be certain of their performance against other choices.

David Waite, of Frontier Agriculture, has seen hybrid barley performing well in Scotland, as well as in areas such as Lincolnshire and Yorkshire, and believes its uptake will continue.

“It has a place where second wheats are a struggle,” he says.

Frontier will be selling the hybrid variety Quadra this autumn. “It’s an early-maturing hybrid, with a yield of 109 and resistance to barley mosaic virus,” he adds.

Where next for hybrid barley?

Hybrid barley accounts for about 20% of the UK winter barley area, or some 70,000ha, says James Taylor-Alford of Syngenta.

Of that, 23,000ha has been entered into the cash-back yield guarantee that the company launched last year, and intends to repeat this autumn, he says.

While the majority of seed sales to date have been in the variety Volume, there are also four other Hyvido varieties – Quadra, Galation, Fletcher and Bamboo – that are suited to different regions.

In the pipeline are eight further hybrid varieties, all of which are higher yielding than Volume and have better specific weight.

“We’ve stepped up our investment in hybrid breeding. Not all of the eight potential varieties will make it, but it shows our intent,” he says.

Syngenta is working with the HGCA to get hybrids back on to the Recommended List.

“We’re not convinced that the current protocols allow the full genetic potential of hybrids to be expressed. So we’re in discussions about the key areas – nitrogen programme, harvest timing and yield targets – and we’re optimistic that a compromise position can be achieved,” says Dr Taylor-Alford.

The lower grain price means an additional 0.5t/ha over conventional barley is needed from the hybrids to cover the extra cost of the seed, he says.

“Seed will be the same price as last year and is supplied in 5ha packs,” he adds.

Venture, with its full approval for brewing use, and Talisman, with provisional approval 2 for brewing, are the two highest-yielding winter malting barley varieties on the HGCA Recommended List.

Stuart Shand, of Gleadell, anticipates there will be buy-back contracts for both varieties, despite the steady decline in the winter malting area.

“There is an established market for winter malting barley, so it’s good to see higher-yielding types, with agronomic characteristics that suit growers,” he added.