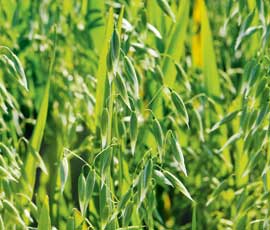 Winter oats could prove to be the surprise winner this season, yielding nearly 9t/ha, according to the latest HGCA Recommended List harvest results.

As expected, the naked varieties Grafton, Fusion and the candidate Beacon have yielded less than husked varieties, but all three varieties have performed better in 2013 compared with the five-year average, says HGCA Recommended List manager Simon Oxley.

Balado typically tops the yield table and is currently the highest-yielding variety (106%). The candidate variety Selwyn is however, achieving a similar yield. Mascani has done well, particularly at the Hampshire site, with a higher yield (109%) than the five-year average.

“Top yields were seen at the site in Devon where Balado and Rhapsody (both 108%) have performed particularly well,” says Mr Oxley.

In commercial crops, about 70% of the British oat crop (winter and spring) had been harvested, according to the latest HGCA/ADAS report. The current average yield estimate is 5.6-5.8 t/ha, slightly above the five-year average, with the best crops on moisture-retentive soils yielding up to 9.5t/ha.

However, the report highlights that specific weights are low in the East, while being better in the West.