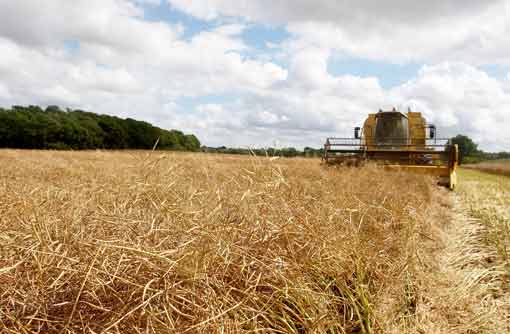 They may not change the order at the top end of the two oilseed rape lists, but the six varieties added this year all have something to offer and widen the grower’s choice, summarises Simon Kightley of NIAB TAG.

In the east/west region, none of the three new varieties beat the existing top three on gross output, but they are different plant types, he points out.

“The current top choices, PR46W21, DK Cabernet and Sesame, are all on the tall and late side. The newcomers are earlier and, in their groups, comparatively shorter.”

Mr Kightley points out that PR46W21 continues to set hybrid standards, while conventional type DK Cabernet has proved itself over four seasons, becoming a major variety. The other conventional variety, Sesame, has been less consistent, he notes, but it remains among the best performers.

This means the new varieties, conventional DK Camelot, hybrid DK Expower and semi-dwarf hybrid Thorin, have all had to work hard to gain recommendation.

“DK Camelot comes into the low biomass grouping,” he says. “It’s a nice, short variety with reasonable earliness and a high gross output of 106%.

“Its obvious place is as a Castille replacement, although it doesn’t bring better disease resistance, with a six for light leaf spot and a five for stem canker.”

Hybrid DK Expower is not at the top for yield with 105%, but has a nine for stem canker resistance and a six for light leaf spot. “It’s a second choice hybrid and will probably be an Excalibur replacement.”

Both DK Camelot and DK Expower add choice at the top end of the list, he believes. “But it’s interesting to note that the new semi-dwarf, Thorin, is not far behind them. It has a gross output of 104% and is representative of how rapidly this group is progressing.” 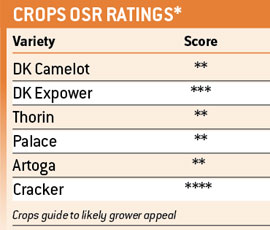 Thorin is a big step forwards in its category, stresses Mr Kightley. “The bonus of its standing ability and very short height really opens up the crop management options.”

In the north region, the three varieties added to the list also fail to change the order at the top, with Compass, Cuillin and Fashion holding on to their lead with a gross output advantage.

Newcomers Palace and Artoga, both hybrids, are 3-4% behind, although this shouldn’t be given too much emphasis, he recommends.

“There are far fewer trial numbers in the north, so this gap could close up.”

Palace, which was already recommended for the east/west region, has a seven for light leaf spot, he reports. “That’s perhaps not ideal for the north, as Cuillin is already there with a nine. Artoga has the same seven rating, while Compass and Fashion both have sixes.”

Palace is early flowering and has the better straw characteristics of the two, both of which are fairly tall, he continues. “However, Artoga is early maturing and has the earliest maturity of any variety on the northern list, which will be attractive to some.”

The third newcomer, Cracker, is a very good development, highlights Mr Kightley. “It’s for growing on clubroot infested land, as it has resistance. It will replace Mendel, which had the same resistance, but a much lower gross output.”

Cracker has a gross output of 103%. “But it also has very good lodging resistance, medium-early maturity and a light leaf spot rating of nine. So it’s a complete package.”

The better disease resistance found in DK Expower and Cracker is good news and both will find favour with growers.

But establishing a following for all six new varieties will be more difficult, especially where it’s hard to find something to elevate them above current best sellers. That’s the general view of the seed trade.

DK Expower’s phoma rating of nine is needed in the east/west region and will take some of the pressure off, believes Lee Bennett of Openfield. “It’s one of a range of varieties with this resistance and it’s the start of things to come.”

But he’s less certain about DK Camelot’s place. “I’m not sure that we need it, even if it is low biomass. There are higher yielding conventionals which have proved straightforward to grow and harvest.”

Thorin makes the semi dwarfs look respectable, he states. “They are competitive now. But it might be good to drop the semi-dwarf label and call them very short hybrids instead.”

David Waite of Frontier Agriculture names Cracker as a dead cert. “It’s already very popular with growers on clubroot infested land, after it spent two years in the trialling system. It brings the light leaf spot resistance they need as well.”

Palace, which has also been marketed early, fits in with the likes of Cuillin and Catana, he adds. “Artoga is a bit more difficult to place, but it is earlier.”

Barry Barker of Masstock picks out DK Expower. “It will attract growers to move on from Excalibur. It has a good, wide drilling window and is better suited than most varieties if drilling is delayed.”

Suffolk-based independent agronomist Mike Warner sees a place for DK Expower, which he predicts will take land from the likes of Excalibur and Rhino.

“It looks good and offers hybrid growers the right characteristics,” he says.

DK Camelot could take the place of some of the DK Cabernet in the area, he notes. “Otherwise, the conventional acreage is made up of Vision, Fashion and Sesame.”

Those who were growing Castille have reverted to Es Astrid and Es Alienor, he reveals. “They are giving consistently high yields and have better Verticillium wilt tolerance.”