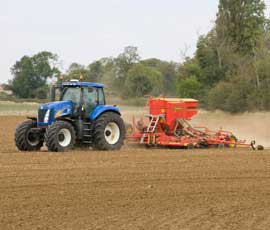 Planned drilling of British winter wheat was 30-40% completed by the end of September helped by generally dry weather throughout the month, the HGCA reported.

The earliest crops were sown from around September 10 and were already emerging helped by warm temperatures and some rain, the group’s arable crop report for September 2013 added.

An estimated 20% of the planned winter barley area was drilled by the end of the month, with 99% of winter oilseed rape completed and most drilled in the mid-August to mid-September period.

The report, prepared by ADAS crop consultants for the HGCA, said September winter wheat drilling can be advantageous in getting the crop established in good conditions.

However, there are some disadvantages such as the increased risk of lodging, the raised risk of diseases such as take-all in second wheats and BYDV spread by aphids, and also a reduced opportunity to use stale seed-beds to control blackgrass and other weeds.