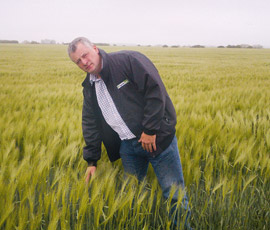 A Yorkshire grower is attempting to break the 12.2t/ha Guinness world record, for the highest barley yield by growing a crop of Hyvido hybrid barley.

Based in Skirlaugh near Hull, farmer John Porter, partner of FA Porter and Sons, has grown hybrid barley for more than five years and regularly achieved high yields in his farm, ranging from 11-13t/ha in the past few years

Although his top yield has stayed fairly constant, the average yield on the farm has gradually increased by improving output on the poorer areas of land, something he puts largely down to precision farming, which will be a key feature in the record attempt.

“The eight hectare world record plot [attempt] has very variable soil types, as does the rest of the farm, which is where precision farming has its role.

“All my P&K is applied at variable rates. We’ve done satellite mapping for soil fertility for the past 10 years, with fields being sampled and mapped on a rotational basis.”

Mr Porter has increased the nitrogen to 260kg/ha from the farm standard of 220kg/ha, putting a greater focus on feeding the ear, splitting his applications at 60, 110 and 90kg/ha.

The crop was sown on 24 September as a third cereal using the conventional plough and cultivate method and Mr Porter says removing any constraints from the crop to let it reach its full potential has been pivotal in the attempt.

“The crop has received a robust four-spray fungicide programme and I’ve also been very robust with growth regulators to keep the base strong.

“Hybrid barley is a tall six-row barley and thus will lodge to some degree in most years, so these are important.”

Treating the barley crop more like a wheat crop in the management is something Mr Porter believes will help see a higher yield in the end.

The fungicide programme has incorporated some of the latest technology using SDHI fungicide IZM (isopyrazam) in Cebara, which Syngenta’s Chris Hostick suggests will offer the addition physiological benefits.

Meanwhile, Mr Porter notes he has replicated the four-spray fungicide programme, applied at three-quarter rate, on another trial at Skirlaugh and these crops are also looking extremely well.

“The farm philosophy is to use the latest technology to identify crop requirements for inputs and apply those inputs variably to maximise production and minimise waste.”

The current record is held by a yield of 12.2t/ha of winter barley from 21.29ha. This was achieved in Scotland by Stockton Park on 2 August 1989.

Mr Porter and Syngenta have been working closely with trial services company SGS (Société Générale de Surveillance) to monitor the crop and prepare for the attempt. Despite the season, Mr Porter is confident he can break the record, providing he gets a helping hand from the weather in the coming months.

“If we get a good summer, we could do it. It’s had a rough start, but it’s looking very good at the minute so if we begin to get some warmer weather, there’s certainly the tillers there,” he says.