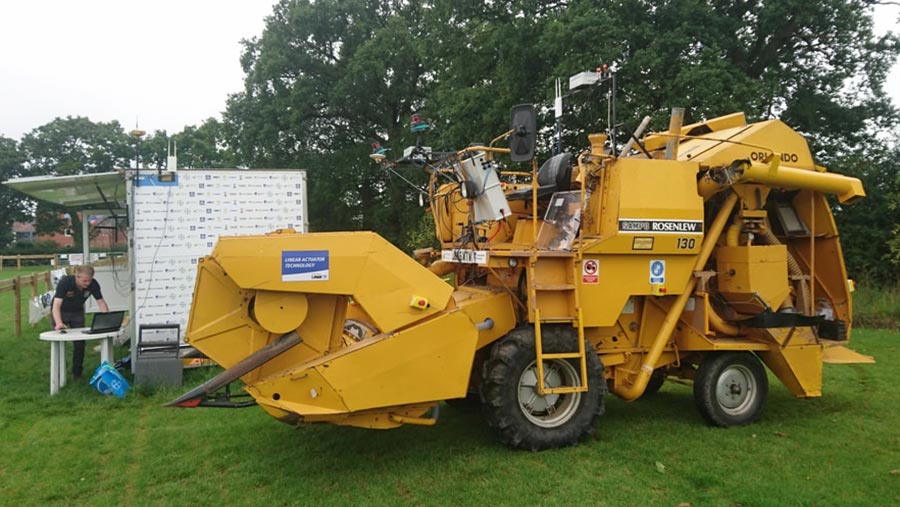 A crop experiment aiming to be the first in the world to be grown from start to finish using only drones and autonomous vehicles is about to be harvested.

The crop of spring barley grown by Harper Adams University in partnership with Precision Decisions will be harvested in the next three weeks by an autonomous combine.

The Hands-Free Hectare team has been working hard to ensure the robotic combine will be ready in time.

Project lead Kit Franklin said he was expecting the crop to yield reasonably well despite misses where the autonomous tractor was not driving straight.

“The combine is using very similar systems to the ones we established on the tractor that we used for spraying, drilling and rolling our hectare,” Mr Franklin said.

“There’s a large number of actuators to move and control all of the systems on the combine which have had to be fitted.”

While harvest is looking promising, the project has not gone completely to plan.

After successfully drilling and rolling the crop the team missed their target for applying a pre-emergence spray due to the time taken to reconfigure the tractor.

“Sadly, we missed that target but we have since managed to get on our T1 and T2 fungicides, including a herbicide to help tackle some grassweeds we were seeing and micronutrients to aid the crop growth, so chemical coming from Bayer and the nutrients from Yara, which is great,” added Mr Franklin.

The team’s agronomist, Hutchinsons’ Kieran Walsh, has had to rely on a robot scout to bring back soil and plant samples from set points in the field for him to examine.

He said the project has forced him to think “outside the box” in order to be able to give the best agronomic advice.

“For me this has been one of the most challenging parts of the project, as I get a feel of what crops are doing when I walk through a field.

“With our hands-free crop I’ve studied the scout video footage very closely to determine the weed levels and disease on the crop,” he said.

“This has enabled me to ask the team to pick certain plants and check specific areas for disease levels and crop growth stages.”