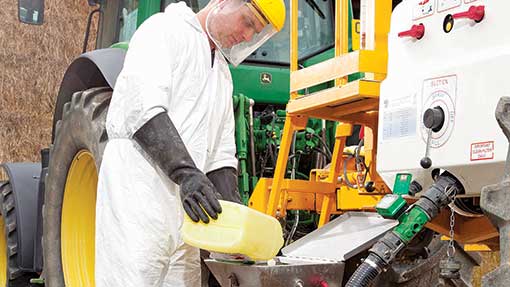 Growers are being given an early warning of possible troubles ahead after ryegrass was shown to develop target–site resistance to the ALS inhibitor group of herbicides.

Seed collected in 2012 for testing has proved to have this resistance mechanism – the first time it has been found in the UK, reveals weed expert Stephen Moss of Rothamsted Research.

“We knew ryegrass had resistance to ACCase herbicides and that there was enhanced metabolism resistance out there,” he says.

“But now we know that there’s also ALS target-site resistance, with implications for the use of products such as Atlantis and the Broadway range,” Dr Moss adds.

Fortunately, it is at a much lower frequency than is currently seen in blackgrass populations.

“But that could change. Growers should take action to avoid its spread and seed should be tested if they suspect resistance, rather than assuming it’s due to enhanced metabolism,” he says.

When Atlantis was applied to the resistant ryegrass population at Rothamsted, only 52% control was achieved, reports Dr Moss.

“Placing more reliance on the pre-emergence materials will be important in the future. Growers need to reduce their dependence on post-emergence sprays and make good use of cultural control methods,” he adds.

Axial (pinoxaden) still works well in many situations, he says.

“Resistance to the ACCase herbicides is also at a low frequency, so Axial can have a place in the spring, although overuse will inevitably lead to more resistance,” Dr Moss adds.

It’s no surprise that ryegrass is following in the footsteps of blackgrass, says Chris Bean, technical director of distribution and agronomy group Zantra.

“Most farms have combined ryegrass and blackgrass problems that are managed together. And even if they don’t, the choice of chemistry to control both problems is similar,” he points out.

Stale seed-beds can be very effective for both weeds, but the past two autumns have made these difficult for growers to achieve.

“Where ploughing is used, it’s important to keep the seed ploughed down for long enough. The decline curve for ryegrass is similar to that of blackgrass,” he says.

Pre-emergence herbicides are essential, with flufenacet + pendimethalin (as in Crystal) the preferred option where ryegrass is the main target.

“Pendimethalin is the better partner. Adding DFF [diflufenican] to the mix is not as good on ryegrass as it is on blackgrass, nor is flupyrsulfuron,” Mr Bean adds.However, both flurtamone and Defy (prosulfocarb) will add a bit to pre-emergence performance, he says.

“Ryegrass doesn’t seem to have the same dormancy issues as blackgrass and most of it germinates early in the season,” he says.

If Axial is to be used on surviving ryegrass, he warns against going on too soon in the spring.

“The weed needs to be actively growing and you must use the 0.45 litre/ha rate, with up to the maximum rate of the recommended adjuvant,” Mr Bean adds.

However, he warns to be careful, as tank mixing with a sulfonylurea for broad-leaved weeds can reduce the activity of Axial.