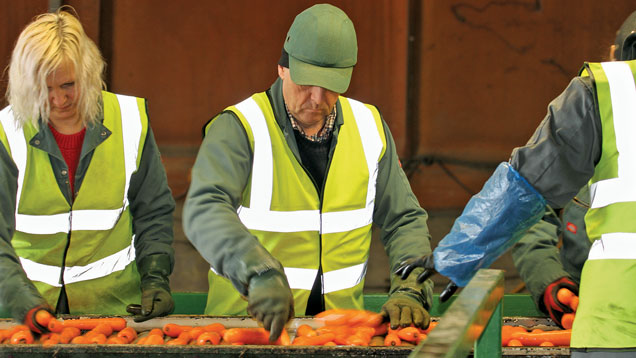 The winter months are especially busy for a north eastern Scottish family-owned and run business as it supplies the major retailers with a steady stream of carrots, swedes, and beetroot.

This means December, January and February are hectic at Maxwell Farms as it produces and sells more than 10,000 tonnes of vegetable annually from its base at Carnoustie, near Turriff in Aberdeenshire.

Farm manager Gary Jamieson admits to being on a mission to even out the peaks and troughs the  23-strong workforce has to cope with throughout the season.

The emphasis is on export, with 120,000 tonnes of seed potatoes being exported all round the world.

“The domestic market has become smaller, but there’s demand from overseas. All seed potatoes have left the farm by the end of November, with particular varieties being aimed at different countries,” he adds

The north east of Scotland has some major advantages as it is a high health status region.  “There’s no virus issue and it’s free from aphids and bacterial diseases,” says Dr Wale.

Since taking on the manager’s role, he has increased the area of cereals to 550ha to help with the workload issue while he also grows seed potatoes.

“We specialise in the production and packing of quality vegetables – mainly carrots, swedes and beetroot – for retail, wholesale and processing markets,” he says.

See also: Farmer’s own cold-pressed rapeseed oil is a winner

Cereal crops are important for both the financial contribution they make and the protective straw that is produced at harvest, This straw is chopped and put back into the soil after the carrots have been lifted.

“Soil structure is essential for growing quality vegetable crops, where deep cultivations are required. So as well as the straw being incorporated, we use local farmyard manures,” he says.

The farm’s switch from traditional mixed farming to vegetable production occured in the 1980s, recalls managing director Graham Maxwell, who adds that both potatoes and swedes were being grown for retailer Morrisons by the 1990s.

“Today, we are supplying most of the UK’s major retailers with both conventional and organic produce. We also work very closely with Baxters, a company with a considerable requirement for Scottish produce,” he says.

The climate in north east Scotland is perfect for vegetable production, he acknowledges. “It’s cool and mild, with long day length hours in the summer, together with plenty of rainfall.”

Almost all the vegetables are packed and processed on-site using the farm’s washing and grading equipment, while the power required for all operations is supplied by its own wind turbine.

New growing methods are always being investigated, as the business looks for ways to increase production and fulfil its environmental obligations, as well as meet the exacting standards set by retailers.

“Reducing pesticide use, without compromising product quality or shelf-life, is one of our key aims,” explains Mr Maxwell.

“This year, for example, we have successfully grown conventional carrots without the need for nematicides. That breakthrough came from the results of trials on our organic carrots,” he says.

The business’s success has been recognised by leading retailers, having been awarded a Tesco Nurture Gold Producer Award and a Marks & Spencer Farmer of the Future Award

Baxters Food Group, a fourth generation family-owned business with its headquarters in Fochabers, buys £7m worth of vegetables, fruit, meat and sugar from UK farms.

With a £160m annual turnover food processing business, the group is primarily a branded food manufacturer, but it also supplies products to third party brand owners.

UK production facilities are located in Fochabers, Colchester and Staffordshire, while the company also has factories in Canada, Australia and Poland.

The company spends £2m each year on Scottish produce – buying all of its carrots, potatoes and swedes from local growers, and the majority of its onions and beetroot. It also sources dairy products, barley, cauliflowers and raspberries from Scotland’s farms.