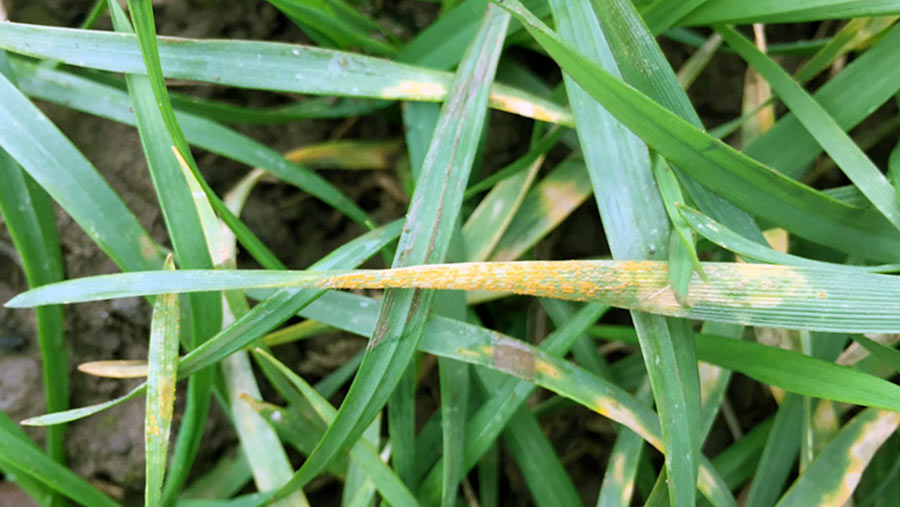 Early yellow rust in winter wheat is being flagged as a potential problem for crops in the North East, despite plummeting temperatures and frosts.

Frontier agronomist Andy Roy tells Farmers Weekly that he is seeing the disease in a range of varieties across the farms he covers in North Yorkshire, Durham and south Northumberland.

“Prior to the frosts we had yellow rust showing up on several farms on the North East coast. I’ve seen yellow rust in Reflection, which we would expect, Skyfall, Grafton and Revelation.

“It’s not a call to arms yet and there are no plans to treat with the frosts now. We will need to monitor it and see what happens through the winter and into spring,” he says.

Mr Roy adds that he has seen a surprising amount of yellow rust in the variety Revelation, but notes that this may be due to the variety having a weaker resistance to the disease in the early growth stages, with this particular variety’s resistance picking up later on.

Clubroot is also becoming an issue in oilseed rape in the North East, reports Mr Roy. He says the disease is likely to be widespread in crops, but may be going unnoticed and urges growers to check crops carefully.

The yield-strangling disease is caused by a soil-borne fungus and is an extremely persistent pathogen.

While there is little growers can do once infection takes hold, Mr Roy says a healthy dose of nutrients such as boron and other trace elements along with early nitrogen can help.