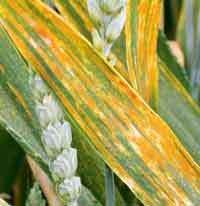 Every few years, yellow rust hits the headlines as it mutates and overcomes previously resistant varieties.

Slejpner and Robigus are classic examples; now this season, several other varieties, notably Oakley, have joined them in falling victim to another new strain.

While yield, quality and end-markets will continue to be the main drivers behind variety choice, disease resistance must be remembered because of its influence on a variety achieving its potential – and the cost of doing so, says NIAB’s Rosemary Bayles.

“I don’t believe we’re getting too carried away with yellow rust; 2009 certainly brought the disease into prominence because of the impact of recent race changes on several popular varieties and some up and coming ones.”

The season showed once again how the pathogen can evolve to overcome the genes on which varieties depend for resistance. 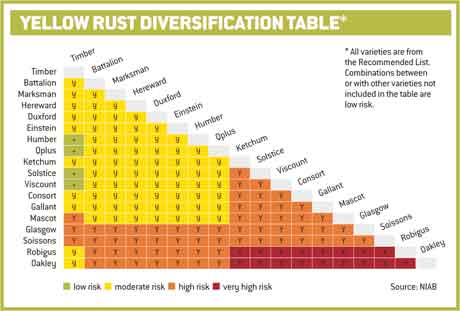 But few growers, except those in the highest risk areas, routinely make much use of diversification, she admits. “I’m certain there’ll be more interest for next season.

“If yellow rust appears in one variety on the farm, it’s important to know which others on the farm are at risk from the same race and their relative susceptibility. That helps plan the most efficient and cost-effective disease control strategy.”

Seed treatment alone is not the solution, she advises. “If a grower wants to grow, say, Oakley, it would be wise to think about seed treatment as a first line of defence. But it would be sensible to spread the overall rust risk (and reduce seed treatment cost) with less susceptible varieties from other diversification groups.”

But the latest NIAB information shows there are still resistant varieties in all four nabim groups, ie in Group 1 Malacca and Xi19, in Group 2 Panorama , Deben, Scout and Zebedee, in Group 3 Alchemy, JB Diego, Cassius, and Gladiator, and in Group 4 Istabraq.

Former AICC chairman Peter Taylor admits that despite the scientific excellence of NIAB’s diversification charts, few farmers and advisers use them. But the work remains important, as the fungicide armoury might be depleted, he says.

“Variety choice should always be considered ‘in the round’.”

Looking solely at yellow rust growers might be tempted to drop Oakley for J B Diego, which has similar yield and better grain quality.

Growers in yellow rust hotspots could choose from Group A, adds Mr Taylor. “But remember these individually have issues with other diseases, blossom midge, lower yield, or low protein.

“For those with large acreages, seed dressings on susceptible varieties should be considered.

“Susceptible second wheats should have Jockey to include take-all and yellow rust, while early-drilled first wheat could have the equivalent of Baytan.

Avoid having too much of one variety, is the straightforward advice from Masstock’s Colin Lloyd.

“Maybe keep Oakley just as a first wheat now that we have Duxford and Diego, which are potentially higher yielding than Oakley as second wheats.”

TAG’s Andrew Wells considers it dangerous to place too much reliance on varietal resistance, and more logical to select wheat varieties initially on grain quality, yield and standing ability.

“However, it would be sensible to not grow a large proportion of varieties that are very susceptible to yellow rust in an area where the rust pressure is high.” That should avoid problems if the weather prevents timely spring fungicide applications.