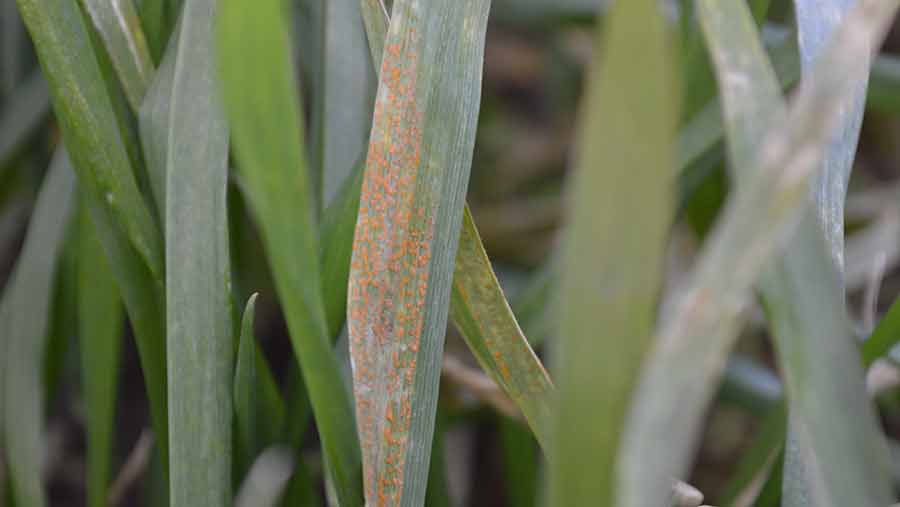 A mild and wet winter has seen yellow rust appearing in wheat crops across the country, and it could rival septoria as the biggest disease yield threat to the crop.

Mr Clark, technical director at crop consultants Niab, said new races of yellow rust and the many susceptible wheat varieties being grown will increase the threat as well as the disease-friendly weather.

“Yellow rust is now as serious a problem as septoria, and is as bad if not worse than in 2014 and 2015,” Mr Clark told Farmers Weekly.

The disease threat is being exacerbated by new aggressive strains of yellow rust being seen with a number of different Warrior races emerging and the newly discovered Kranich race.

“The new Warrior races are changing the game while there is a new potential threat from the Kranich race,” he said.

Attacks from yellow rust are being seen nationwide with Farmers Weekly examining infected wheat crop in South Lincolnshire and on the Hampshire Downs in the last few days.

Recent frosts have tempered disease levels, but Mr Clark believes the sporadic cold temperatures are not enough to control the disease, especially as the Warrior races cycle quickly and produces more spores than other races.

The Kranich race was first found in Denmark and Sweden in 2011, and two new wheat varieties with good resistance to the disease, Spyder and Graham, have shown very slightly more susceptibility to the new strain.

Rust around The Wash

David Hoyles, who farms in a yellow rust hotspot bordering The Wash in south-east Lincolnshire, is seeing the disease across most of the winter wheats in a variety trial on his farm.

One on his main varieties this season is the biscuit-making wheat Britannia, which is showing signs of yellow rust despite a high disease resistance score of 8, in a 1-9 scale, where 9 in the most resistant.

Some wheat varieties have high resistance to yellow rust with scores of 9 such as Crusoe, Evolution and Revelation and others have lowly 3s such as Solstice and Kielder.

He is seeing signs of yellow rust at one of the group’s trial sites near Stockbridge and advised growers to prepare for T0 fungicides, which are often applied in late March, to control the disease.

Mr Clark advised growers that they need to treat crops if the disease is active and aggressive, but if the rust levels are light with just the odd spot of disease then growers can hold off until the T0 timing.

“If you have active yellow rust in the crop then you have to assume it needs treating even if the variety is rated a 8 or 9 for resistance to the disease,” Mr Clark said.

Fortunately, there is no evidence of yellow rust resistance to fungicides and he advised the use of an azole such as tebuconazole, epoxiconazole or cyproconazole should be used.

Ben Freer, business development manager at agrochemicals group BASF, agreed that if yellow rust is active it will need treating ahead of a T0 spray.

“If you can see that the disease is widespread in your fields then you need to treat as you can’t wait to see if it will develop into a real problem,” he said.

If yellow rust is not active and only seen at lower levels then a strobilurin fungicide could be used such as pyraclostrobin, azoxystrobin or picoxystrobin in place of an azole, experts said.

All these treatments can be mixed with a multi-site fungicide, such as chlorothalonil, to give protection against septoria.