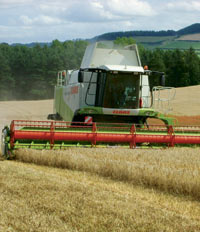 Charlie Edgley is just over half way through harvest at Kensham Farm, Cadmore End, Berkshire, and yields are very disappointing.

“It has been a bit of a nightmare getting it between the showers.

“Everything looked very promising indeed before harvest – we had probably the best weed control we’ve ever had and it looked a picture.”

As well as the dry spring, every field had been affected by Saddle Gall midge, which can’t have helped yields, said Mr Edgley.

“But we’re into some heavier land now, which is doing a bit better.”

“And bushelweights are all very good, in the high 70s and low 80s.”

Gallant, which had looked thin, was easy to combine and yielded the same as Solstice, which looked fantastic, and was much harder to combine, he added. “It was all straw and no grain.”

Having cut 445ha (1100 acres) of wheat, Mr Edgley had 344ha (850 acres) of Solstice, Barrie and Diego to finish off. “I am a bit worried about the quality because it has started to lose its colour.”