A more streamlined approach to “prescription cultivation” is promised with the introduction of a tractor-mounted scanner that enables variations in soil type and compaction depth to be identified on the go.

The Topsoil Mapper demonstrated at Tillage-Live 2016 is decribed by Soyl agricultural development manager David Whattoff as “just what’s needed to encourage the uptake of precision cultivation”.

“We discovered the device at last year’s Agritechnica show and immediately recognised its significance,” he says. 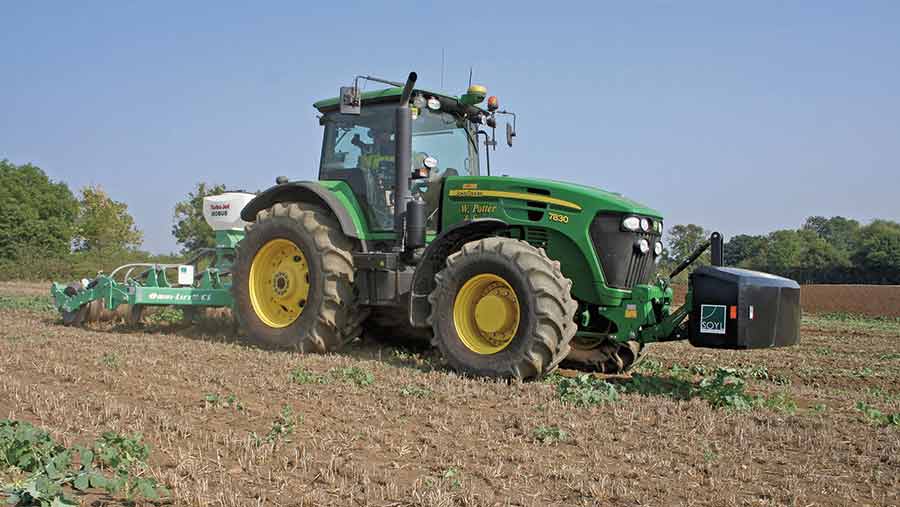 “Previously, doing conductivity scanning, creating a prescription map and then using the map to control a cultivator were all carried out separately. But with the Topsoil Mapper it becomes a single operation.”

The new device continuously measures soil moisture, soil texture and the depth to compacted layers throughout the topsoil profile using electromagnetic induction via an array of transmitters and receiving coils.

“Variation in soil properties are calculated automatically and the sensor system has been optimised to take into account the speed of the tractor, the size of the cultivator and the response time of the hydraulic system,” adds Mr Whattoff.

“There are significant potential benefits from ensuring correct cultivation depth for every soil type; we have seen diesel savings in addition to improved work rates through reduced load on machinery.”

The standard Topsoil Mapper, developed by Austrian firm Geoprospectors, has a lightweight GRP body for the sensors and can be carried on a tractor’s front linkage.

But the version demonstrated at Tillage-Live is encased in concrete (apart from the underside) to protect the delicate electronics from potential impact damage during the rough and tumble of farm operations.

The structure looks like a regular ballast block – the only outward clue to its additional role is a cable running out the back to the tractor.

As someone who already practices variable-depth cultivation based on the existing SoylScan service, Yorkshire farmer Graham Potter – whose outfit was used for the demonstration – is enthusiastic about the new device.

“We have huge variability in soil types – not just from field to field, but within fields,” he points out.

“Scanning and examining soils to create zone maps of compacted soil depth ensures we are doing the job effectively at least cost in terms of time and fuel consumption.”

Compared with previous practice, his Plowman Omni-Lift soil loosener is run a bit deeper on the farm’s light, sandy soils, typically to a maximum of 400mm. It is run a bit shallower – no more than 270mm – on the heavier ground.

With the tractor’s three-point linkage set to float, the Soyl Autodepth controller mounted on the frame alters the implement’s hydraulically adjusted packer-roller according to the readings and working depth prescription. 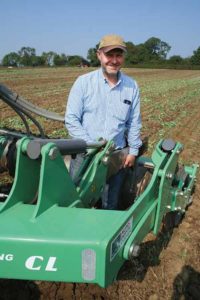 “You can vary depth plus or minus 75mm or so before affecting the angle of the point and wings, so that’s not a problem,” says Jim Kelsey of Plowman Agriculture.

The Omni-Lift has the NG low-draft tine system from JJ Metcalfe, with its replaceable wearing edge sections in tungsten carbide steel. Graham Potter’s example has a simple cam-lock mechanism allowing the five legs to be quickly reconfigured.

“We came up with this design to suit Graham’s requirements for a way of taking legs out of work when they are not needed,” says Mr Kelsey.

“Each leg is lifted manually until its supported by the cam-lock, which is easily released to bring the leg back down.”

The Omni-Lift can be operated with the centre leg lifted when taking out tractor wheelings or with just the two outer legs engaged to deal with combine wheelings. Both avoid the fuel cost of loosening soil unnecessarily.

“At a recent demonstration on Mr Potter’s farm, we worked the implement with just two legs at 400mm, the sort of depth farmers will typically use to make sure they take out all compaction,” says Mr Kelsey.

“The fuel monitor on his 225hp tractor showed consumption of 32 litres/hour reduced to about 26 litres/hour with the auto-depth system active.”

The Titan trailed implement from Cultivation Solutions can also work with Soyl’s Autodepth controller, but at Tillage-Live the emphasis was on another aspect of its versatility, namely the ability to work its disc and tine elements individually or together. 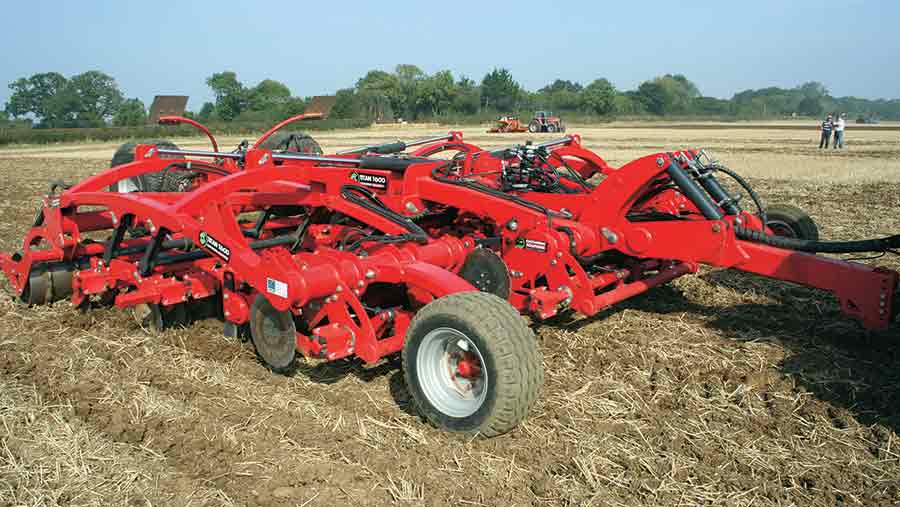 National sales manager Rhun Jones suggests the Titan might be run with just the shallow-working discs deployed to get a post-harvest chit under way.

Both the discs and the slimline soil-loosening legs work for primary tillage on stubbles while just the 500mm-spaced tines are deployed to loosen ground ahead of spring drilling.

“The low-disturbance tines avoid mixing soil profiles and thanks to the front support wheels and rear packer, the discs can be worked very shallow, so the Titan is well equipped to operate in soils with high blackgrass populations,” says Mr Jones. 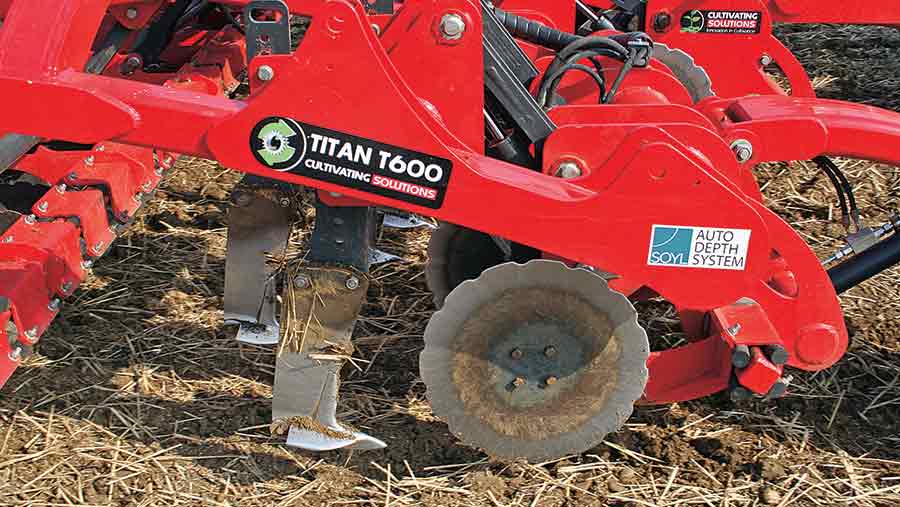 “Hydraulic adjustment of all elements – including lifting them out of work if required – is done at the touch of a button and the tines can operate with Soyl’s Autodepth system without affecting the other elements.” 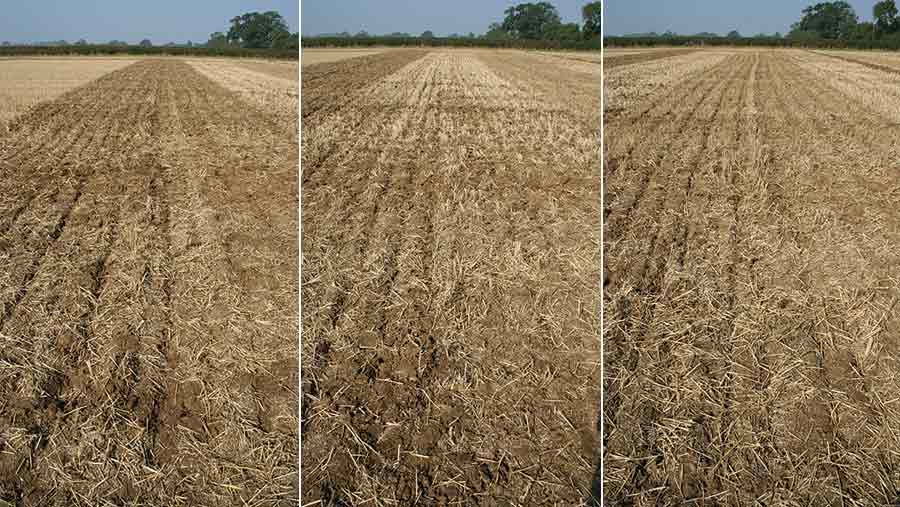