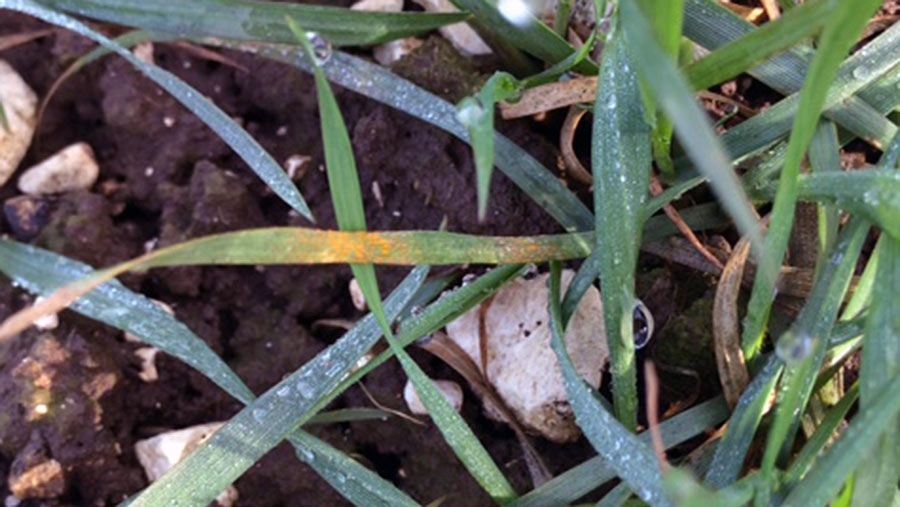 An early fungicide spray to keep yellow rust in check may be needed within days as cool, damp conditions aid the spread of the disease in wheat crops.

A range of winter wheat varieties is showing signs of yellow rust at the trials site of agronomy group Frontier in Haywood, south Yorkshire.

The group’s national trials manager Andrew Hartley tells Farmers Weekly growers should consider deploying a pre-T0 to stay on top of the disease.

“We saw a bit of yellow rust in crops before Christmas, but the weather has changed now and temperatures are rising which is helping the spread of yellow rust.

“It likes the damp, cooler mornings we’ve been getting so we need to monitor it closely,” he says.

Mr Hartley adds the disease has been spotted in wheat varieties such as Reflection, Coridale and Santiago, which have yellow rust resistance scores of 3, 4 and 6 respectively, on a 1-9 scale where 9 is good resistance and 1 is very poor.

“At the trials site, I will probably be holding off until T0 if possible and then taking appropriate action.

“But in my view, growers might be pushed into using the pre-T0 if they are going in with a herbicide.”

He estimates the T0 fungicide spray timing is still roughly four weeks away in Yorkshire, and leaving the disease unchecked for this length of time risks letting the disease threat grow to levels that may prove harder to control.

Yellow rust across the UK

No time for complacency on #yellowrust Example from KWS Santiago today with a month to go until T0 #beprepared pic.twitter.com/YBjON8k8bs

Reports of yellow rust are on the increase…. pic.twitter.com/8A5ENiOJQL

Septoria on the move

Septoria not just confined to lower leaves & starting to move up the canopy at at our Callow demo @Bayer4CropsUK pic.twitter.com/eKkMGuozYn

Costello looking great and getting away well after OSR. Septoria easy to find @AgriiWest pic.twitter.com/uJBfwfKCPf