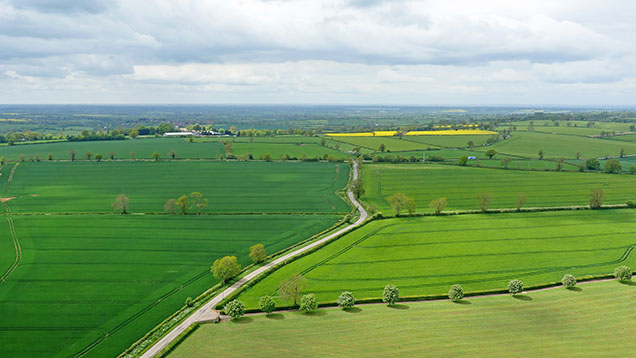 Two large arable farms and a 500-cow dairy enterprise are being sold as part of the 1,875-acre Ashby St Ledgers Estate between Rugby and Northampton.

Its investor-owners are disposing of the asset, having let the various holdings out for the past decade on farm business tenancies (FBTs).

The land is Grade 3 with fine loamy over clayey soils suitable for cereals and grassland.

Ed Smith, an associate with Carter Jonas in Oxford, said the units had been run commercially by the current tenants and were offered with vacant possession next year.

The main farmstead near Daventry offers 823 acres of mainly arable land and comprises modern, portal-framed buildings with 4,750t of grain storage on-floor and in eight bins.

There is a 20t/hour continuous flow dryer and roof-mounted solar PV as well as former dairy buildings and modern livestock housing.

The large fields have good access, are largely drained and put to a combinable crop rotation. It has a guide price of £8.4m.

The smallest unit being sold is about 347 acres and is predominantly in arable cropping.

Access to the large, undulating parcels is via internal tracks and about half the acreage has been drained.

A modern farmhouse is subject to an agricultural occupancy restriction and the lot has a guide price of £3.95m.

The majority of Ashby Home Farm and Ashby Grange Farm are subject to a FBT ending on 28 September 2015.

Having been run as a successful dairy unit with about 500 cows across 652 acres, consent has now been granted to revert some 445 acres of pasture back to arable production. About 85 acres of permanent pasture will remain.

With the current tenant moving to a new site, much of the milking equipment will be removed or sold, leaving a number of cattle yards and a feed store plus traditional buildings. The lot is subject to a FBT ending June 2016.

Two dwellings and about 80 acres of park and woodland are included in the guide price of £6.75m.