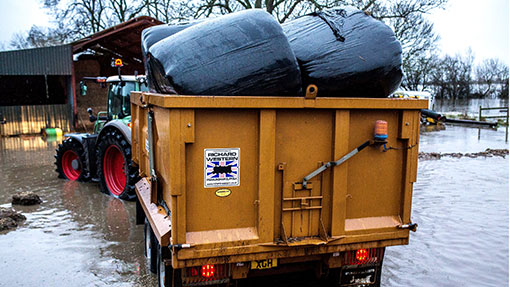 Farmers recovering from the winter floods will be able to apply for government grants of up to £35,000.

The government said it was increasing the level of grants available to those farmers who were worst hit in the disaster.

DEFRA is already taking bids for grants of up to £5,000 from Phase One of the £10m Farm Recovery Fund, which opened on 28 February.

But from 28 April, farmers who have already applied for a grant in Phase 1 can also apply for a second larger grant in Phase 2, up to a combined total of £35,000.

The additional money has been kept in reserve for the worst affected farmers who needed longer to assess the extent of flood damage.

At the height of the floods in February, prime minister David Cameron declared “money is no object” in the flood relief effort .

The Farm Recovery Fund was made available to help farmers affected by flooding get their land back into production as quickly as possible.

DEFRA secretary Owen Paterson is due to revisit farms on the Somerset Levels this week to see for himself how much progress has been made in the recovery.

Speaking ahead of his visit, he said: “Our farming industry contributes billions of pounds to the UK economy every year and we want to see it get back to business as soon as possible.

“From the end of the month, farmers will be able to apply for up to £35,000 to meet the costs of putting flooded farmland back into production.”

Somerset beef producer James Winslade, whose family farm in Moorland was engulfed with the floods, welcomed the latest response by the government.

He said: “It’s good that the government has acknowledged the scale of the problem.

“We have insurance but it mostly covers damage caused by fire and not floods. I will definitely apply for this additional grant money. Unless I apply for this grant I will not cope.”

But he added: “Hopefully, the forms will be easier to fill out than the last round. I had to provide photographic evidence that I had been flooded even though images of my farm have been all over the media.”

For information on how to apply for funding, visit this link on DEFRA’s website.