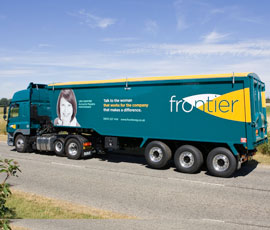 Grain trading contributed just over half of Frontier Agriculture’s record profits in the year ended 30 June 2011.

Operating profit almost doubled to £40.5m before interest and tax, compared with £22.5m the previous year. Profit on ordinary activities after tax was £27.8m, giving a 15% return on total capital employed.

This was the year in which wheat prices, driven by the Russian export ban, went through the £200/t barrier, encouraging high crop plantings and buoyant markets for the main arable inputs.

While the company may be best known for its high profile grain business which contributed “exceptional earnings” in this year, managing director Mark Aitchison is keen to stress the balance which six years of investment has built.

Crop inputs and non grain related activities accounted for 45% of annual earnings to 30 June 2011. At more than £100m, crop protection turnover has doubled in just three years alongside the expansion of the company’s agronomy services, which included several acquisitions.

Earnings from fertiliser, seed and crop protection sales were the highest since the company was formed in 2005.

As in previous years, parent companies ABF and Cargill will take no dividends, with profits and cash from ongoing operations being reinvested in the company.

“Our whole objective has been to build a strong balance sheet,” said Mr Aitchison. “Now it is very strong and that allows us to take a long-term view.”