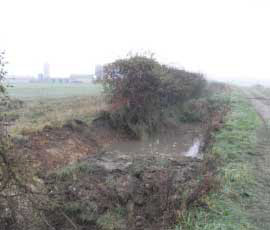 Leading anearobic digestion firm Biogen has been fined £5,000 for polluting a mile-long stretch of a Bedfordshire stream.

Biogen was found guilty of a breach of its environmental permit at Clapham Biogas Plant, in November 2010.

Bedfordshire Magistrates Court heard on Wednesday (6 June) that liquid digestate that came from a tank belonging to Biogen had entered a tributary of Ravensden Brook.

Biogen said an estimated 300,000 litres of digestate overflowed in the incident, of which about 10,000 litres escaped off-site.

The incident was triggered by one of the pumps on an anaerobic digester being left on overnight, which led to the large quantity of digestate overflowing into a nearby field, according to the Environment Agency.

A Biogen member of staff saw liquid running down the road as they arrived at work at 4am, the court was told.

An hour later another employee saw more liquid in a field close to their own pig unit, operated by Bedfordia Farms Ltd. Biogen is part of the Bedfordia Group.

However, the Environment Agency was not notified of the environmental problem until late the following afternoon.

Miriam Tordoff, prosecuting, said Biogen had been warned about fitting alarms because its Rushden site had a similar incident two months previously.

Praveen Saigal, defending, said: “You hear very little of the good work that plants such as Biogen do, but when things go wrong they attract bad publicity.”

The Environment Agency blasted Biogen for causing avoidable pollution and taking too long to notify the regulator of the problem.

“It was an avoidable accident that resulted from Biogen’s failure to comply with their environmental permit,” said senior environment officer Charan Sekhon.

“This case sends a clear message to Biogas Plant operators that they must ensure they have a robust infrastructure and pollution prevention measures in place.”