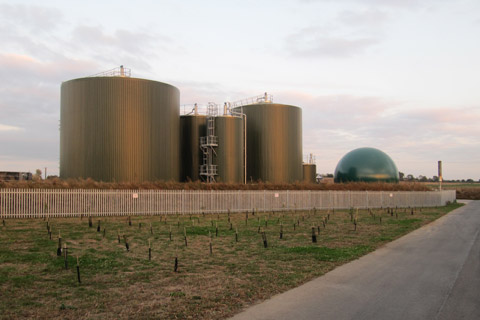 Harnessing power from livestock waste has enabled one of the UK’s largest agricultural colleges to slash energy costs and eliminate its carbon footprint.

Harper Adams University will eventually offset carbon emissions at its campus near Newport, Shropshire, more than three times over thanks to its new £3.7m anaerobic digestion plant.

By combining slurry from the university’s 400-cow and 2,500-pig herds with food waste, the university has reduced its need to buy in gas and electricity for power and heating while finding a way to cut waste. The 500kW combined heat and power unit will produce around 4,000MWh of electricity and 4,100MWh of heat each year. Electricity is used on the university campus with the surplus exported to the grid.

“We wanted to be more self-sufficient in energy,” said Paul Moran, the university’s estates manager. “I spend £600,000 on energy every year and I wanted to reduce our exposure to price volatility.

“As well as cutting costs, it’s also helping us harness the power of the waste system, processing 15,000t of farm and 8,000t of food waste.”

The unit, which has been running since October but was officially opened in January, was built using money from the Higher Education Funding Council, the university and energy company E.ON.

Mr Moran said taking the time to ensure everyone involved was happy with the plans and the right contracts were secured was vital.

“It took 18 months for all the planning and procurement and six months of that was talking to the locals and holding consultations in the village,” he said.

“You can’t underestimate the importance of talking to people from the very beginning.

“When they raised issues, we made sure we incorporated things in the design to overcome them. That’s what helped ensure we didn’t get any objections from the community when the planning application was put in.”

With food waste being sourced from local commercial businesses and the council, Mr Moran said getting the food contract right was the most difficult element of the process.

“The amount of food waste in the UK make it attractive as an energy source, but much of it is hard to get heat out of.

“Only a small amount of it is source-segregated and you can’t just put anything in there; it has to be the right kind of quality rubbish. That means we don’t just rely on one source of food waste to get all the fuel we need.”

Mr Moran said he had to work hard with college farm manager Scott Kirby to find the right combinations of animal and food waste to be treated over the 42 days material is retained in the digester.

“We’ve realised that the success of AD is very site-specific,” said Mr Kirby. “AD is good if the circumstances are right. You can waste lots of money trying to get the right answer and we have grey hairs from learning things the hard way.

“As people become more aware of AD they want to take up the technology, but there is a large amount of regulation involved and that can be off-putting if you’re not properly prepared.”

Mr Moran agreed the most important element of the system was having the right regulation and management in place.

“All the regulatory agencies have been very co-operative,” he said. “It’s an awful lot of work but the Environment Agency and Animal Health have been great. You need to have everything in place though – from top to bottom.”

The AD plant has already allowed the college to become between 70-80% self-sufficient in energy and Mr Moran said it was an investment that would continue to bring benefits.

“It’s more expensive than other AD plants would be because we’ve included a viewing platform so students and visitors can learn about the benefits of AD.

“But as well as generating renewable energy for the university it will bring additional commercial revenue as we can sell what we don’t use to the grid.”

Another useful byproduct from the AD process is the 21,000t of nutrient-rich liquid fertiliser and compost digestate which Mr Moran and Mr Kirby hope to spread on to the university’s farmland, removing the need for mineral fertiliser.

“The material from our digester has been lab-tested and it’s shown it gives more bang for your buck when it’s spread,” Mr Moran added (see box).

“The total nitrogen is up threefold from the original slurry and the amount converted to ammonia is more than threefold, making it more available for plant utilisation.

“Our next step is to apply for an exemption from the Environment Agency so that the digestate is classified as a product rather than a waste and we can then spread it.

“We also need to look into maximising storage, but eventually we hope we will be maximising everything waste has to offer.”

Fertiliser produced as a byproduct from the Harper AD plant: