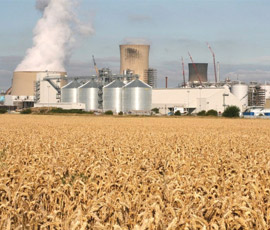 One of the world’s largest wheat biorefinery plants is to close indefinitely due to adverse market conditions.

The £300m Ensus plant at Teesside, capable of processing more than 1m tonnes of wheat a year, will cease production less than eight months after it reopened, having previously been mothballed for 15 months.

A spokesman for the firm said: “We regretfully confirm that due to continuing adverse market conditions, we are having to temporarily pause production at our plant.

“At this stage we don’t know how long this pause will be, but we hope that market conditions can improve and that the plant will become operational again in the near future.”

The closure removes a key market for UK feed wheat and particularly this season for low-quality feed wheat – Ensus was one of the few homes which would take wheat down to 60kg/hl. In October it began importing European maize to mix with UK wheat in a bid to keep the plant operating efficiently.

Near Hull, the UK’s second largest bioethanol plant, Vivergo’s £350m biorefinery, is yet to reach full capacity of 1.1m tonnes a year, despite having anticipated reaching that target in the first quarter of this year.

“We started production before Christmas and have been ramping up since then, but it’s taking a bit longer to get up to full production than planned,” said a spokeswoman for the firm. She declined to say when full production was likely to be reached, or what capacity the plant was currently running at.

Gary Bright, managing director of GrainCo, said there was still plenty of low quality wheat left across the UK, which could now be more difficult to find a home for. “There are barnfuls of poor quality grain out there,” he said.

“There has been a little bit of export in the past couple of weeks to Germany and Spain, but most EU destinations want 68kg/hl, which could be difficult to meet. Ensus has been a godsend for farmers and the trade this year, so we hope very much that the shutdown is temporary.”