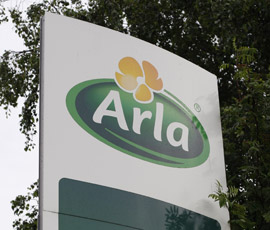 Dairy farmers supplying Arla via the Arla Foods Milk Partnership (AFMP) will have the chance to become full members of the EU farmer-owned co-op on 1 January 2014.

The 1,250 farmers, who supply the dairy giant with around 1.6bn litres of milk a year, have had their roadmap to full co-op membership confirmed.

On 1 January 2014, Milk Partnership Limited – the investment company in which all AFMP farmers are members – will become a corporate member and co-owner of Arla Foods amba.

AFMP members, as well as farmers on Arla direct and Arla Milk Link direct (around 300 producers), will be offered the chance to join 12,250 farmers across Europe, including Arla Milk Link producers in the UK, in owning a part of the EU farmer co-op.

Upon co-op membership, they will receive the Arla amba standard litre price, and benefit from the 13th payment (annual return on investment, paid in March for the previous milk year) and commit to investing in the co-op via common and individual consolidation.

To become full members of the Arla amba, AFMP farmers will invest 7.5p/litre into the company through the following means:

Initially the route to co-op membership will only be open to existing AFMP, Arla direct and Arla Milk Link direct suppliers, to a maximum of 1.8bn litres.

Producers will have until 15 November to decide whether or not to take up the offer. Those not wishing to become full co-op members will be transferred to, or remain on, direct supply contracts.

If the 1.8bn litre pool isn’t filled, the offer will be extended to new suppliers on a first come first served basis. Interested parties are advised to register their interest now.

“This move takes our ambition to the next level by providing the security of a milk price determined by European and world markets, from a well-balanced, well-invested, farmer-owned business, which has access to the global marketplace and operates across all dairy categories,” said AFMP and MPL chairman Jonathan Ovens.

The original roadmap outlining their entry into the co-op accounted for a three and a half year transition period to full membership, with the first 13th payment scheduled for 2017, based on milk supplied in 2016.

However, as a result of stronger than anticipated business performance in the UK, AML suppliers will now receive their first 13th payment in March 2015, based on milk supplied in 2014.

This announcement follows news earlier this month that AML members will receive a 0.77p/litre price increase to 32.31p/litre from 2 September.

* Both the AFMP roadmap and new AML 13th payment plans will require approval of Arla Foods amba’s board of representatives on 9/10 October. MPL members will vote for MPL to become a co-operative at an all-member AFMP meeting on 30 October.

Arla profits double in first half of 2013