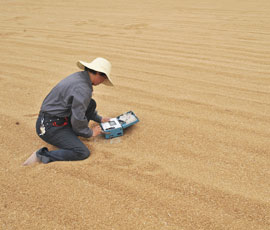 UK agricultural exports to China are to be stepped up following a trade mission to Beijing by farm minister Jim Paice.

The seven-day trade mission, from 17-23 May, aims to break down export barriers and open up trade with the world’s biggest economy.

China offers huge opportunities for Britain’s farming, food and drink sector, which has a reputation for food quality and safety and for innovation and expertise in farming, said Mr Paice.

“Food and farming already plays a vital role in the UK economy but I believe there are still huge opportunities for growth in emerging markets like China.

“We need to keep ahead of the game by developing strong trade relationships with the world’s second largest economy. That’s why I’ve made this trade mission a priority.

“China wants what Britain has to offer – outstanding food and drink, high quality animals for breeding and farming skills and expertise that are second to none.”

Mr Paice said he would be looking to build relationships with key retailers and importers to smooth the path for British producers looking to make their mark on China.

Pork is the fashionable, meat of choice, for the Chinese and with a growing population with more money in their pockets the demand for pork is booming.

And while the trade in breeding pigs is worth millions to the UK economy, British skills and breeding programmes have the potential to be even more lucrative.

The show is said to be one of the biggest of its kind in the region and a key place for British farming businesses to demonstrate their expertise to Chinese buyers.

The Minister will also visit the company AB Agri, just outside of Beijing

The visit is likely to be to the ABNA Ruminant Feed Mill in Tianjin, which is a British business that has a growing number of interests in China.

The sugar arm of the business works with some 200,000 farmers on the ground in China.