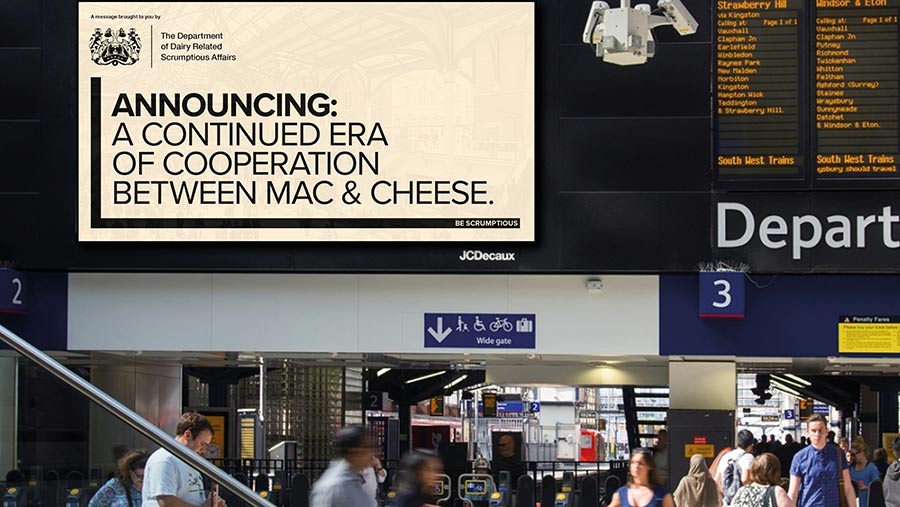 A £1.2m consumer campaign aimed at reminding the public of its love for dairy found that 11% of 26-41-year-olds were less likely to replace dairy products with alternatives – well ahead of expectations.

The campaign, jointly funded by AHDB Dairy and Dairy UK, created a spoof government agency – the Department of Dairy Related Scrumptious Affairs – and focused on digital marketing, a move away from the more traditional approach seen in previous industry campaigns.

“We took a bit of a risk moving away from traditional formats but the results exceeded all expectations,” said AHDB head of crops and dairy marketing Rebecca Miah.

Sentiment around the advertisements was 99.9% positive, with just one negative story from the vegan website Plant Based News, out of a total of 369 items of coverage.

#TeamDairy farmer got his #ShoutAboutDairy banner up in Gargrave….he’s not on #LeTourDeYorkshire route but only a couple of miles away from the race on Sunday & will defo b seen by anyone travelling to watch! pic.twitter.com/jMeegtm8R4

About 19 million consumers interacted with the campaign on social media, which promoted its positive dairy message through online personalities with large follower bases, known as “influencers”.

This week saw a divided nation. The cause of the outrage? A scone. Which side of the debate are you on? The Department has been notified, watch this space…

“This campaign was about creating an attitude shift among consumers,” Ms Miah said.

“The vast majority of people love dairy but 90% of products are consumed as part of or with another product, like a latte or a cheese sandwich.”

She added that declining consumption of dairy products could often be attributed to falls of these host products and not dairy by itself.

A Monday Mantra made for us. #coffee #hotdrink #instacoffee #coffeebreak #coffeeaddict

The campaign’s success has secured a further £1.2m to run for a second consecutive year

“We are now looking at finding new host products for the next generation of dairy consumers. Mexican food is growing in popularity and frozen yoghurt or ‘froyo’ has proven to be a huge success,” Ms Miah said.

The focus for year two of the campaign would also shift towards a younger audience between the ages of 16-24.

Farmers have played a crucial role in the campaigns success, according to Rebecca Miah, who added that consumers want to learn about where their food comes from.

“They have been brilliant at taking to social media to share the natural qualities of dairy and its ‘food to fork’ story.

“Lots of farmers downloaded promotional packs and I’ve seen farm banners across the country on prime real estate such as the sides of motorways and main roads that we would never be able to afford.”

Great to see Home Farm displaying #shoutaboutdairy next to their Milk Vendor in Spital-in-the-Street, Lincs! Big plans! There will soon be 1000 cows here! @AHDB_Dairy #teamdairy pic.twitter.com/xDKXizI1t0

Ms Miah added that the message had been taken into schools and local markets by farmers, spreading the message of productivity.

Farmers looking to get involved in the second year of the campaign can order materials on the AHDB Dairy website or get tips on how to interact on social media from the Tell It Like It Is webpage.