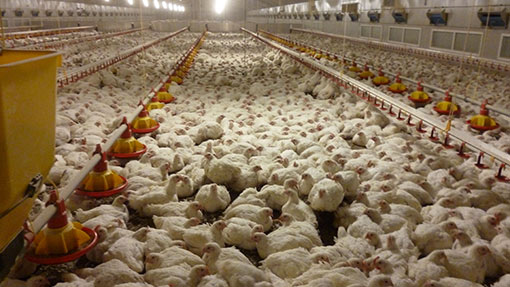 A poultry farm in Gloucestershire has installed air-source heat pumps into a new shed, which are warming an underfloor heating system and generating Renewable Heat Incentive payments.

Stonehouse Farm, near Ledbury, is believed to be the first poultry shed in the country to use such a system. The installation is a new addition to brothers Reg and Graham Watkins’ existing two sheds at the site.

“For the existing LPG-heated sheds, energy consumption is equating to about 3.75kWh per bird, due to the increased ventilation requirements needed to reduce the carbon dioxide and humidity levels produced by the in-house burners,” Reg Watkins explained.

“We estimate this will drop to below 1kWh a bird using the Ecodan system and it has already proved a much more comfortable environment for the chickens.

“Although the new shed has better levels of insulation than the older, LPG-heated sheds, the difference is outstanding,” he added.

The new 1,620sq m shed has six 14kW Ecodan air-source heat pumps feeding warmed water into underfloor heating. The first crop of birds has just finished, and the heating system has used just over 4,000kW of electricity, according to installer Chris Chapman of Bavenhill Mechanics.

The total cost of the system was about £160,000, which includes the underfloor heating system, the air-exchange unit and a backup LPG heater.

Mr Chapman said that, depending on RHI, payback “could be as little as three years”. “We have regularly installed Ecodans into people’s homes and several offices, but this is the first time we’ve fitted the renewable heating on a farm.”