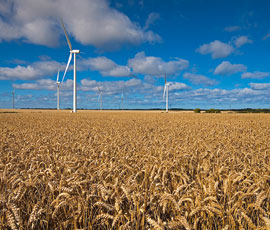 Almost 5,500 acres have come to the market in Northumberland and Berwickshire, offering a range of opportunities from cereals to wind farming.

Four fully equipped, well-managed and productive farms, 19 residential properties, development opportunities and a total 4,411 acres are included in one of the largest land sales in the north-east of England for many years.

Offers in the region of £20m are being sought for the Ellington, Northumberland-based Alcan Farms property portfolio. The land is owned by mining and mineral giant Rio Tinto and the sale includes an operational 13-turbine wind farm and strategic mineral assets.

Almost 3,000 acres of the land is being offered with vacant possession; the remainder is tenanted under AHA and unusually, these include assignable tenancy agreements.

The farms run from the coast at Cresswell south towards Ashington. They were acquired when the former Rio Tinto smelter and power station at nearby Lynemouth was developed, but this closed last year. The four well-equipped units have been part of the Alcan Farms business since 1973.

Current management focuses primarily on the cereal rotation and there is potential to expand the arable acreage, which is run alongside a mixed livestock enterprise of a 340-head suckler herd and a commercial flock of 525 ewes.

“This portfolio offers many options,” said Graeme Bruce, partner in charge of the Alwick office of YoungsRPS. “It is unusual on a number of levels and as such we are anticipating interest from a diverse range of potential buyers and investors.”

Jim Beattie, Alcan Farms manager, added: “We’ve farmed this land on a commercial basis for a number of years and we believe it has great potential for further development.” (YoungsRPS 01665 606800).

A little further north in Berwickshire a fully equipped pair of adjoining commercial arable farms will also spice up the late spring market, given their location and quality.

These bring 861 acres to the market with vacant possession, in a secluded location at Whitsome, near Duns, just eight miles from the A1.

Hilton & Dykegatehead Farms have been farmed as one unit by the Moralee family since 1946, and come to the market due to retirement. They include two four-bedroom houses, six cottages, a modern steading with about 4,000t on-floor grain storage and a steading with planning consent for four new-build dwellings.