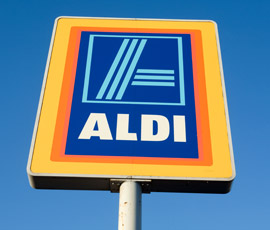 Aldi has more than doubled its pre-tax profit in the UK after it took one million customers from the big four retailers in 2012.

The retailer put the growth down to increases in footfall, market share and basket size.

Latest Kantar Worldpanel figures show the discounter achieved 3.7% of market share in the 12 weeks to 15 September.

Aldi also invested in new stores – opening 34 during 2012 and attracting 1.1 million more shoppers, according to Nielsen Homescan Data for the four weeks to 14 September.

Aldi also attributes its success to British sourcing. At Christmas 2012 this included selling a whole, free range, bronze purebreed fresh turkey for the first time, while its everyday ranges of fresh meat, milk and eggs are all British.

“We are continuing to open stores right across the country, attracting more people and a broader demographic to Aldi,” said Matthew Barnes, joint group managing director.

“We have opened in affluent locations like Knutsford and Winchester and have quickly won over local customers with our award winning quality and value.”