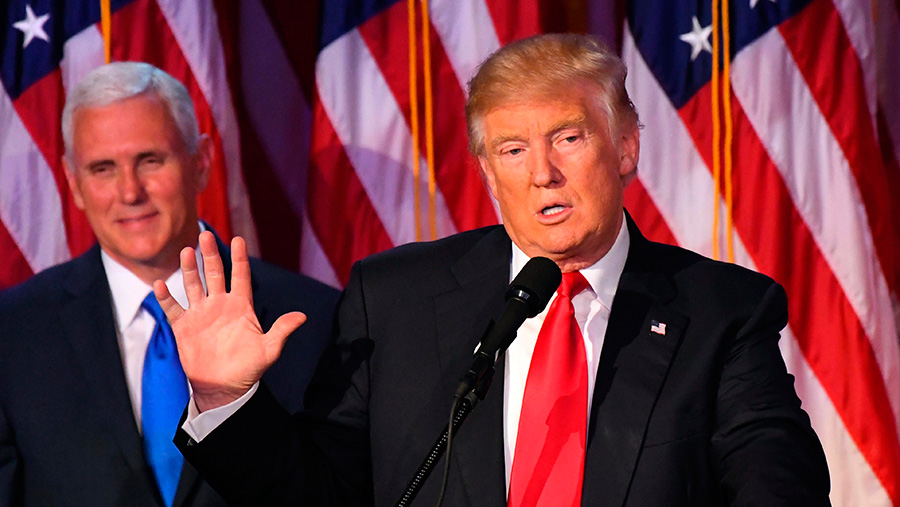 Market reaction to the election of Donald Trump as the next US president has been mixed.

Stock and commodity markets had mainly fallen, although by less than expected, while gold had risen on Wednesday (9 November).

The longer term effects are likely to be greater than the immediate shock and many markets recovered much of the ground they had lost just a few hours after Trump claimed victory.

The dollar had been expected to be hit hard, but by lunchtime on results day it was at $1.24 against the pound compared with $1.25 at the end of the previous week.

If it continues to weaken further it is likely to make US commodity exports more competitive on the world market.

“Most economists believe that Trump’s stated policies would do damage to the US, and possibly the world economy” Richard King, Andersons

Grain prices in the UK continue to be shielded from low global values by the relative weakness of the pound, the high quality of UK wheat from the 2016 harvest and continued farmer reluctance to sell on a market that has been rising for four months since the result of the EU referendum.

This left midweek ex-farm prices at very similar levels to a week earlier.

What we know about Trump’s likely policies

The Trump presidency, for many, brings a concern of raised risk and unpredictability, in particular in trade and foreign policy areas.

US agriculture under Trump is likely to continue on a track of high-volume, low-cost commodity production, relying heavily on exports.

The American businessman has pledged to increase the freedom of farmers, reduce red tape, and has said that his plans for lower taxes will help family farms.

See also: Minister under pressure to back British farmers

However, he has also led a campaign strongly against immigrants, many of whom are the backbone of the agricultural workforce in the US.

He will maintain the Farm Bill, which provides safety-net risk insurance to maintain income and cover disaster losses, to which farmers contribute.

He also supports the biofuel sector, important for maintaining maize prices in the US and therefore grain prices globally.

What about trade deals?

He is not a fan of trade deals.

The Transpacific Trade Partnership – hailed just months ago as the largest international trade agreement ever agreed and a great breakthrough – is already under pressure and likely to flounder under a Trump presidency.

The Transatlantic Trade and Investment Partnership, the bilateral trade agreement being negotiated between the US and the EU, which aims to reduce regulatory barriers to trade, has been roundly rejected by Mr Trump and is now largely seen as doomed.

This may make it easier for the UK, after its exit from EU membership, to negotiate its own trade deal with the US, although Trump has pledged high tariffs on exports from other countries.

Currency and price changes, whether for imported feed or exporting grain and other produce, were the immediate obvious effect for UK commodity values.

But there could also be a knock in economic confidence which would affect demand as well, said Andersons head of business research Richard King.

“Most economists believe that Trump’s stated policies would do damage to the US, and possibly the world economy,” he said.

Now it remains to be seen what will actually be enacted, and what the effect will be.