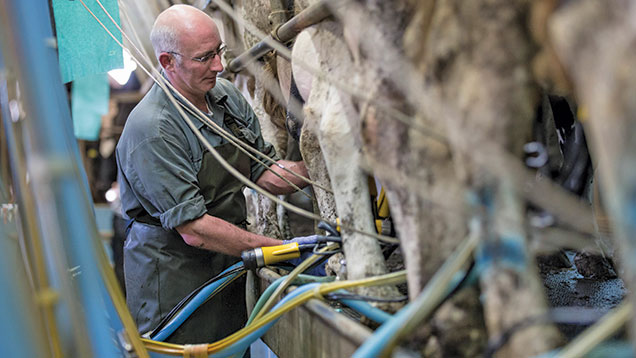 The 20th anniversary of the abolition of the Milk Marketing Boards (MMBs), provides an opportunity to reflect on the changes this brought and to consider the outlook, writes John Allen senior partner at Kite Consulting.

For many, especially older farmers, there is a certain wistfulness about what was lost with the disappearance of the MMBs and the certainty they offered. A managed market might seem like bliss compared with what we face in the next one to two years as another milk price crisis hits us.

Twenty years ago the MMBs paid an average farmgate milk price of 22.3p/litre when an 18% cake was £140/t and an average cow yielded 5,235 litres. At the time dairy farmers complained but they made a net profit after drawings averaging 2p/litre, or £7,750, for the average UK herd of 74 cows.

For the average 130 cow herd today in a similar structure, the average milk price in the year ended March 2014 was about 32p/litre, cost of cake was £260/t and average yield was 7,500 litres with a retained profit of about 2p/litre, so making about £19,500 on the same basis. This milk year will be less profitable.

But The MMBs were never going to last – managed markets flew in the face of liberalising world dairy markets.

While the immediate post-deregulation years saw milk prices rise, many tough years followed. Then in 2008 dairy markets, so long subdued by the overhanging dairy surpluses of the EU, started to awaken. Milk prices had fallen more than 45% in real terms and average profits a cow were lower than in 1994.

More recently producers have also had to get through the challenges of 2009 and 2012.

Beyond the farmgate, a flawed deregulation in Great Britain created a monopolistic milk broker with no processing capacity. This was then dismembered into three smaller co-operatives that were up against it in purchasing their own processing facilities.

With this stark background, where are the positives?

The promise to milk producers that deregulation “would toughen them up,” sounds like something said to a boy arriving at a Victorian public school, yet the past 20 years have seen the UK dairy industry toughened up all along the supply chain and especially at farm level.

Since deregulation we have had milk prices in the UK some 2-3c (1.5-2.3p/litre) lower than the rest of the western states in the EU. This often represents the difference between breakeven and profit. While our EU neighbours have increased average herd size in the past decade, they’ve also increased output, often taking on large debts. They are, therefore, dependent on a higher milk price.

We have generally managed debt better and now operate with a lower cost base, making the UK one of the EU’s most competitive milk producers, albeit not the best in the world.

At processor level, the bodged deregulation contributed to the failure of co-ops such as Dairy Farmers of Britain and the Westbury processing plant, prior to its rescue by the triplet co-operatives.

It also left a processing sector with a declining milk supply, resulting in a chaotic supply chain at times of crisis. However this led to retailer engagement in the supply chain, increasing understanding and removing the silo mentality that still exists in many other countries.

Looking forward we are in a far stronger position than 20 years ago. We have competitive farm operators who have lower operation costs than most other EU milk producers, plus decent balance sheet strength. We have processors who are well-invested scale operators. We also have retailers with a greater understanding of farmers and the supply chain, with consumers who would like to support dairy farmers, although they are still interested in the value offer.

Based on this, we can look beyond the downturn and see an industry capable of growth. Twenty years hence, it is quite possible the UK average dairy herd will be closer to that in New Zealand, at 400 cows, with the diversity of operations in the USA, where small farm operators sit alongside larger farms.

Average yields will no doubt be more than 9,000 litres but increased focus on milk solids will probably see a move from about 550kg a cow of fat and protein to more than 700kg. The number of herds may halve to fewer than 5,000 but opportunities for people will remain – cows a person will not increase much because taking care of cows will be the priority for long-term sustainability.

The first 20 years have been tough, but we’ve got this far and, accepting there will be some difficult years such as we have now, we can look forward to enjoying most of the next 20 years.