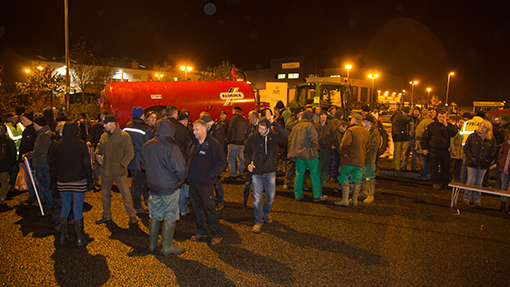 Hundreds of dairy farmers have blockaded the Dairy Crest plant in Foston in the third of a series of protests over milk prices.

Last month, Dairy Crest slashed the prices it paid farmers to supply them with milk for the third consecutive month.

The company announced a reduction of 1.3p/litre on standard liquid and Davidstow milk contracts from 1 November.

It meant farmers on liquid contracts would be paid 27.04p/litre from November – about 3p/litre below the estimated cost of production.

FFA leaders said they were not singling out Dairy Crest and were planning to target various processors and retailers over the coming weeks.

The group has planned a fourth milk protest at the Co-operative Distribution Centre in Andover, Hampshire, on Tuesday (14 October).

The FFA led protests outside the plant in May and June this year, while Foston was targeted in September 2013 and in July and September 2012 during the SOS Dairy campaign.

A Dairy Crest spokeswoman said the business understood the difficulties farmers were facing and would raise its milk price as soon as it was able to.

Dairy UK said milk prices were under severe market pressure and holding blockades would do nothing to lift them.

“The dairy industry is acutely aware of the impact on farmers when there are any drops in milk prices,” a spokeswoman said.

“Everyone in the industry also knows that milk prices are cyclical and determined by a combination of global events such as the downturn in global commodities prices and market forces, be they domestic or international.

“At the moment, all markets are under severe pressure and unfortunately, nobody is insulated from volatility.

“While we fully understand the frustration of farmers, we strongly believe that disruptive protests are in no-one’s interests and do not help the development of a profitable dairy industry based on collaboration throughout the supply chain.”