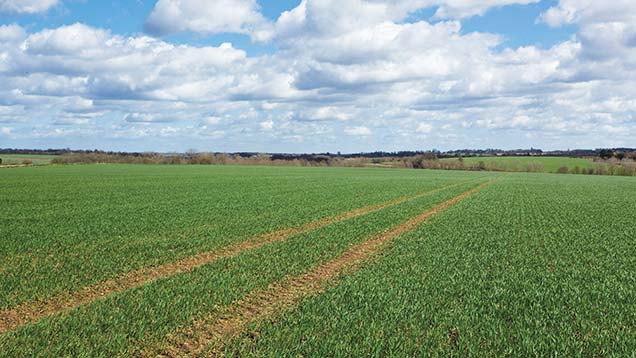 Arable farmers looking for land have a range of options after more than 900 acres entered the market in five locations this week.

Grange Farm, near Staunton in the Vale, comprises 260 acres of predominantly Grade 3 arable soils with a good range of buildings and modern farmhouse.

The buildings are a mix of general purpose steel, portal-framed constructions, former livestock housing and a grain store.

An Entry Level Stewardship Scheme agreement expires in August and BPS entitlements are included in the guide price of £3m. (Savills 01522 508 933)

A 145-acre ring-fenced block of arable land near the city of Durham with strategic investment appeal is for sale as a whole at offers in excess of £1.1m, or in lots.

The land includes a clawback arrangement with a 50% uplift in value payable if the land is developed for any non-agricultural or equestrian use. (Savills 01904 617 833)

About 247 acres on the Suffolk-Essex border is available at a guide price of £3.4m as a whole, or in three lots.

One lot includes a farmhouse with the buildings and 111 acres, while the remaining acreage – largely arable land but with some pasture and woodland – makes up the remaining two lots. (Brown & Co 01284 725 715)

Land at Woodend and Blakesley are separately owned, but local farmers may be interested in purchasing the whole 149 acres due to their proximity.

Blakesley comprises 69 acres split into two fields and is put to spring barley – it is available at a guide price of £630,000 as a whole, or in two lots.

The two parcels, near Sevenoaks, have been put to maize for the past two years.

The larger of the two lots – at Fawkham Road – has about 61 flat acres, while the land at Crowhurst Lane is gently sloping with woodland boundaries.