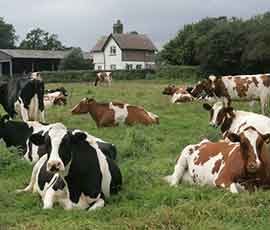 Dairy farmers supplying Arla via the Arla Foods Milk Partnership (AFMP) face a 0.5p/litre milk price deduction from 1 January unless they up their butterfat levels.

Last month the EU dairy co-operative launched a co-ownership package for AFMP producers – around 1,350 farmers – offering them the chance to join more than 12,000 EU farmers in owning the co-op from 1 January 2014.

The group has now written to farmers to inform them that a butterfat penalty of about 0.5p/litre will be applied across the board unless the pool’s average butterfat content rises from 4% to 4.2%.

In a letter to producers, AFMP chairman Jonathan Ovens said all farmers could be faced with the penalty regardless of their individual farm’s butterfat content, describing the issue as a “significant test of our co-operation”.

The co-op required high butterfat levels from its farmers in the UK to meet its requirements for manufacturing Anchor butter, with milk pricing systems for AFMP members set to change to a focus on milk constituents – butterfat and protein – he said.

It had been hoped the butterfat deficit, upon entry to the co-op, would be offset by spreading the retailer premium from AFMP farmers on Sainsbury’s and Tesco contracts across the whole membership. However, because market prices had overtaken retailer prices, retailer premiums were unlikely to cover this, Mr Ovens told Farmers Weekly.

“I have increased mine [butterfat level] by 0.3% in five weeks – I just changed the ration,” he said.

The news would be a surprise to some AFMP farmers although it was unlikely to be a deal-breaker for those interested in joining the Arla co-op, said NFU chief dairy adviser Rob Newbery.

By joining a co-op, farmers agreed to collectively “share the pain and the gain” and those interested in joining would be doing so for the long haul and shaping their production system to suit the contracts, he said.

The roll out of Arla’s farm assurance scheme Arlagarden from 2016 had more potential to cause a shake-up of farm production systems than a drive to increase butterfat levels, he said.

Arla co-op membership – what to consider before signing

Arla to launch farm assurance in UK in 2014