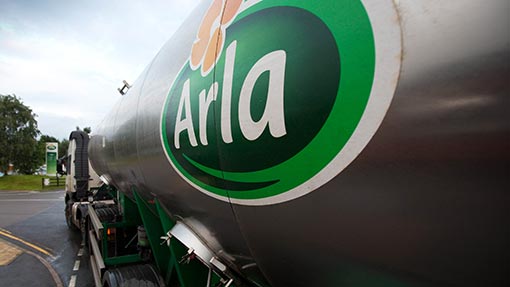 Arla has dropped its standard litre milk price for UK farmers by 1.27p/litre to 33.74p/litre after pressure from falling global commodity prices.

Ash Amirahmadi, Arla Foods UK’s head of milk and member services, said the business had to reflect some of the downward pressure in its on-account milk price.

“Over recent months there has been a significant negative trend in commodity markets and, while the business remains strong, unfortunately we are not immune from fluctuations in the global dairy markets,” he said.

The European co-op’s 300m-litre recruitment drive and decision to raise its price in January to 35.01p/litre had forced other processors to keep prices firm so far this year, despite market pressure.

Industry pundits have suggested an Arla price drop was likely to come at some point in the spring, as European production remained strong.

“Farmers were warned that if they go fully this spring and push milk, there is only one action – processors will cut the milk price,” Mr Handley said.

“Other processors will follow suit like a deck of cards and Arla’s price deduction will be small compared to what others will do.

“We could have had a sustainable milk price but we had to be responsible in our milk management.”

John Allen of Kite Consulting said Arla’s move could not be explained by farmers in the UK putting on extra cows or supermarkets cutting retail prices.

“It shows the different world we are in, where the milk price is now decided elsewhere,” he said.

“We are in a global world and the market price will move up and down.”

Mr Allen suggested farmers should be conservative in budgeting this year, starting at a high price and perhaps finishing lower – the reverse of last year.

“Farmers should also stress test their business model, especially if expanding or as newcomers to see what their break-even milk prices are going forward.”