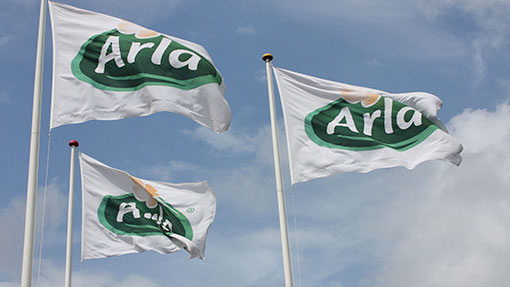 The world’s biggest fresh milk plant has been officially opened in Aylesbury, Buckinghamshire.

The plant started running in November but the co-operative’s farmer-members and staff, local councillors and representatives from the wider UK dairy industry came together to celebrate its completion.

Mr Paterson said the new factory was a “shot in the arm” for the UK dairy industry.

“We were held back for years by the milk marketing board, we were held back by quotas and now this is a symbol of massive investment by the farmers in the Arla co-operative in the future of the industry, not just supplying local consumers but giving a chance to export worldwide,” he said.

“It is all about efficiency, adding value, top-class marketing and brilliant teamwork.”

Building work started at the 70-acre site in February 2012 and the state-of-the-art facility will employ 700 people, including 90 apprentices.

The Aylesbury plant will pool milk from 900 Arla suppliers from the Midlands down to the South West and is located to tap into the large consumer market in and around London.

Arla also wants to make Aylesbury the first zero-carbon facility of its type.

“No one can doubt Arla’s long-term commitment in the UK,” he said. “It gives farmers the assurance that they always have a home for their milk.”

“The other game changer is that we now have 3,000 dairy farmer-owners in the UK. That gives us extra power to feel that we have UK farmers on board in a farmer-owned company.”

Arla is co-owned by 12,600 dairy farmers across Sweden, Denmark , Germany, Belgium, Luxembourg and the UK.

A merger with European co-op Walhorn EGM would take its membership to 13,500 and bring in the first Dutch farmers, if it is approved by national competition authorities.

Arla Foods UK is Britain’s biggest dairy company, processing 3.5bn litres of milk a year, with a turnover of £2.2bn.