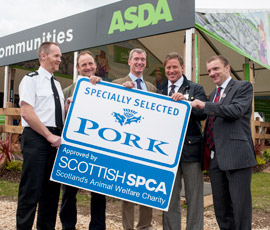 Asda’s commitment to reinstate Specially Selected Pork in its 57 Scottish stores has been described as a major boost to Scotland’s pig sector.

Making the announcement at the Royal Highland Show in Edinburgh today (Thursday 20 June), the retailer said its pigmeat supplier Cranswick Country Foods would be working with Dunbia Elgin, which had increased its slaughter throughput, to ensure its Scottish stores could be supplied with the Scottish SPCA-approved product.

Participation in the assurance scheme, which covers around 98% of Scottish pig production, involves farms being visited by Scottish SPCA inspectors.

Scots farm minister Richard Lochhead described the announcement as a “timely boost to the pig industry in Scotland” and said the scheme was a reminder of the country’s “first class standards from farm to fork”.

Quality Meat Scotland chairman Jim McLaren said the move was a “timely boost” to the scheme, which suffered when the Halls of Broxburn pig processing plant closed earlier this year, and SSP labelled product was temporarily off the shelves.