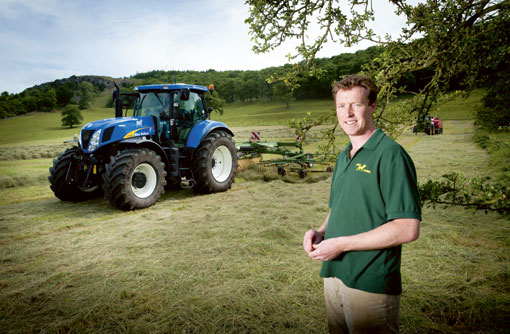 After several years of rapid growth since taking on the 107ha (265-acre) family farm near Richmond in North Yorkshire, Adam Metcalfe is reviewing and restructuring his business.

He currently operates as a sole trader, AWSM Farms, across 1,420ha (3,508 acres). This includes 148ha (365 acres) of owned land with the balance being mainly on contract farming agreements of three to five years plus 113ha (280 acres) of Farm Business Tenancy land.

The plan is to split the business into three distinct parts, with the owned land, buildings and sheep remaining under the AWSM Farms banner.

The motivation behind the separation of the businesses is to protect family assets as other ventures continue to grow.

This will provide contracting services to all of the land farmed by Mr Metcalfe and to other farmers. Mr Yarrow will also own a stake in and become a director of AWSM Farming.

The substantial contracting business offers stubble-to-stubble operations as well as grassland work, with the bulk of the work in baling, slurry injecting, muck spreading and spraying.

The third arm, AWSM Recycling, already operates as a company and has a Solway Recycling collection contract for the area between York and Morpeth. It also takes a range of by-products from local factories and recycles these to agricultural land.

Last year, Mr Metcalfe bought 40ha (100 acres) of land at Lanehead Farm, Hutton Magna, which has now become the base for his business.

Meticulous budgets and costings are the backbone of this business, with financial and operational plans carefully made and closely monitored. “Rising costs and uncertainty over the future of the value of SFP are our biggest challenges,” says Mr Metcalfe.

Substantial savings are made on fertiliser costs through the operation of the waste side of the business, so that very little conventional P and K has to be bought in.

Depending on timing of application, 30-100kg/ha of available nitrogen is also supplied from waste products, which include chicken and other livestock wastes (both solid and liquid), sewage sludge, food wastes and digestate from anaerobic digestion plants.

“We rely very heavily on wastes and manure, it’s really important to get organic matter into the soils. We started handling these products about 10 years ago – it was very much trial and error and there was a lot of error to start with, but we have learned how to adapt, how to treat and handle them now and we have invested a lot in being able to store them to give us flexibility in application timing.”

Agrochemicals are sourced either from Agrovista or through Strutt & Parker’s buying group. “For seed and fertiliser we shop around.

We have bought urea forward at £280/t delivered for July with December payment. This year we will home save wheat and barley seed for the first time for about 500 acres because of the shortage of seed.”

Budgeted yields for first wheats this year have been scaled back from the rolling five-year average of 9.4t/ha (3.8t/acre) to 8.6t/ha (3.5t/acre).

“I think barley has suffered most so we have cut that from 3.22t/acre to 2.75t/acre. The oilseed rape looks very well so we have left that at 1.5t/acre. There’s not going to be a lot of straw about and we will bale everything.”

Grain is sold mainly through Frontier and GrainCo, which is based at South Shields, although some also goes to a local pig producer. Just over half of the 2011 wheat crop is sold, for an average of £159/t ex-farm, while all of the rape is sold at £397/t.

Mr Metcalfe has subscribed to Offre et Demande Agricole’s grain market analysis and advice service for a couple of years, having attended the company’s training course in price risk management. He is seriously tempted to sell some 2012 wheat, but none is sold as yet.

As well as the imminent restructuring of the business, Mr Metcalfe is always considering new ways to approach the same job more efficiently. He has recently switched from hire purchase for his three main tractors to contract hire, providing the benefit of known costs.

“We run the tractors for three years to about 5,000 hours. We previously had all John Deeres, but we recently did a deal with New Holland for a three-year contract hire agreement. We were finding that we were getting big repair bills in the final year of owning, at 3,000 to 4,000 hours and that put a big cost onto the overall cost per hour.”

The farm’s fuel tank has a meter that records fuel volumes through an electronic key fob every time a tractor tank is filled. The operator also enters a job code to identify what operation is being done, with fuel use monitored weekly.

Apart from being able to identify any anomalies that might reduce efficiency, this also allows machines to be compared and means the fuel tank level is always known so that a fuel order can be booked in good time.

Trackers on every vehicle allow monitoring of equipment so that problems are easier to spot. “We have three slurry tankers working at the moment and we know it normally takes five minutes to fill them. But when a pump starts to wear out, that will creep up to six, seven or even nine minutes and the operator may not be aware of this.”

The trackers also provide an extra safety feature as staff are often working alone at locations well away from the yard – a quick check on Mr Metcalfe’s screen shows their location and whether they are moving or not.

There is a race on to complete rebuilding of the fire-damaged 4,000t grain store before harvest. Built just last year, the sheds were storing straw when they caught fire in February as a result of suspected arson.

This happened on the night of the farm’s staff party when everyone was away from the yard.

The store will be served by a new 42t/hour grain drier, avoiding the need for 24-hour operation, which was often necessary with the old drier. Steel fabrication for the repairs has been done by the farm’s staff.

Wider use will be made of precision farming techniques in future. The use of combine yield mapping results has already been accelerated so that any low areas can be treated as soon as possible.

“We used to look at them in the winter, but it’s no use in December so now we jump on this and get it sorted out before cultivations start.”

Mr Metcalfe retains business consultant Hamish Bichan for one day a month to get another perspective on the business and its costs structure and to help negotiate with banks and other suppliers.