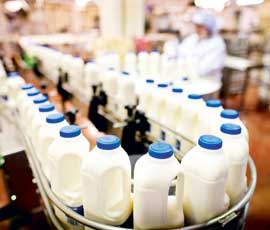 Milk production in August was the highest since 2005, reaching 1.11bn litres – 28.7m litres below July but 52.1m litres more than August last year.

However, cumulative production was still 39.5m litres behind the same time last year, at 5.78bn litres, according to provisional figures from the RPA. Butterfat averaged 3.92%, both for the month and cumulatively.

“Most of the price increases were for manufacturing-/constituent-based contracts,” said the report. “However, there were increases for the Sainsbury’s Dairy Development Group following the quarterly review of input costs, and for farmers on First Milk’s liquid contract.” Price cuts included those for Arla Milk Link owners following adverse currency movements.

“Arla Foods Milk Partnership members may soon have their opportunity to become co-owners of Arla Foods amba,” it added. Subject to members’ votes, farmers would have until 15 November to confirm their intentions.